Ambrose gets down to business at Ipswich test

Ambrose gets down to business at Ipswich test 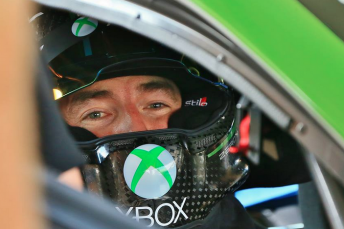 After a preliminary hit-out at a Lakeside ride session on Friday, Marcos Ambrose is today having his first full test aboard Dick Johnson Racing’s Xbox Ford.

The 38-year-old will spend today and Thursday pounding around Queensland Raceway in preparation for his V8 Supercars racing return at the NRMA Sydney 500.

DJR saved the final two of its three annual private test days for Ambrose, whose car will be the sole focus of the track running.

There will be no shortage of tyres available to the Xbox entry, which enjoys access to both the #16 and #17 tyre banks for the tests.

It has also been allocated four sets of new tyres under the wildcard rules, from which its pre-marked rubber for the Sydney race meeting’s practice sessions will be selected.

Friday saw Ambrose settle into the seat of the #66 Falcon but, with passengers on board and no provision for set-up changes, the real work begins today.

CLICK HERE for Ambrose’s initial impressions of the DJR Falcon from Friday.

“The plan is not so much to tune the car to the track, but just to give Marcos a sense of how the adjustments work and behave,” DJR technical director Nick Hughes told Speedcafe.com.

“It’ll just be a process of stepping through different adjustments and letting him feel out how it changes the balance.

“With his level of experience we’re super excited to hear his feedback and thoughts as well. It’ll be a bit of a learning process for everyone.

“He’s well aware that the cars are different from when he last drove them, so he’s very interested to learn more about them.

“We’ve got a few development parts and pieces that we’ll run across the car, probably on Thursday, but that’s not so much the focus, it’s more about getting him comfortable.” While the wildcard is allowing Ambrose to get back into the groove ahead of a full-time return next season, the early installation of Penske-appointed Hughes will also play a key role in ensuring the team hits the ground running next year.

“It’s been a really good opportunity for me to get a feel for these cars, how they work and how the racing works,” he explained, having started with the team in August, ahead of the joint-venture agreement being signed off.

“We’ve been able to establish some thoughts and ideas for what to work on in the off-season so that we can prepare for next year.

“The focus (of the team’s engineering department) at the moment is very much on what we’re going to bring to the track next year, which makes these few months of learning very valuable.

“The cars are quite unique and it takes time to learn and get a feel for these things. It’s been a good opportunity to get a little bit of a jump on next year.”

There, DJR Team Penske will roll out Ambrose’s Falcon with an upgraded FG X aerodynamic package that is being developed by Ford Performance Racing.

While Hughes hopes to incorporate a variety of weight saving and cooling improvements as part of the model changeover, he says that the remainder of the team’s package at the start of next year will only be a mild evolution of DJR’s current car.

“These cars and the field are so competitive that you’ve really got to be on top of everything,” he said when asked of the biggest areas for improvement.

“We’ve been able to identify some lower hanging fruit which is what we’ll go for first, but really we’re looking at everything.

“Everyone likes the idea of being able to roll out a big change for the new season, but when you take out Christmas there’s really not a lot of time,” he added.

“With the model change as well there’s a lot on our plate.

“It’s going to be a continual evolution that we work on during the year, not just the off-season.” Ambrose will enjoy two days of running at QR prior to the Sydney 500. pic: Matthew Paul Photography