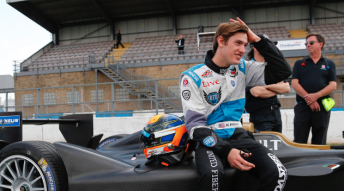 Matthew Brabham will make his FIA Formula E race debut with Andretti Autosport as a replacement for Charles Pic at Malaysia this weekend.

The 20-year-old has been promoted from his role as reserve driver at the American outfit and will now become the youngest driver on the 20 car grid for the second round of the all electric championship at Putrajaya.

The Indy Lights racer also joined up with the Andretti Autosport team at the opening round of the championship in Beijing, where Andretti drivers Franck Montagny and Pic finished second and fourth respectively.

“It’s going to be an exciting weekend to race in Malaysia, it’s come about fairly quickly, but I’m ready for the challenge,” said Brabham.

“The Andretti Formula E team worked hard on preparing these unique cars for tight street circuits and that paid dividends in China. I’ve been communicating closely with the engineers since then to come up with new ideas and strategies for the future races – so hopefully we can move forward again.

“Formula E caught my eye from the beginning – the technology is intriguing and to get the chance to finally race after doing some early testing is really cool.

“The talent and experience in the field is tremendous – it’s the best that you’re likely to see outside a Formula 1 World Championship race. As an up and coming driver, it’s very rare that you get an opportunity to race drivers with such experience.

“I’m the youngest in the field, which is a real honour, but that doesn’t mean anything when the lights go out – I’m there to do a job for Andretti Formula E and position myself as best I can.”