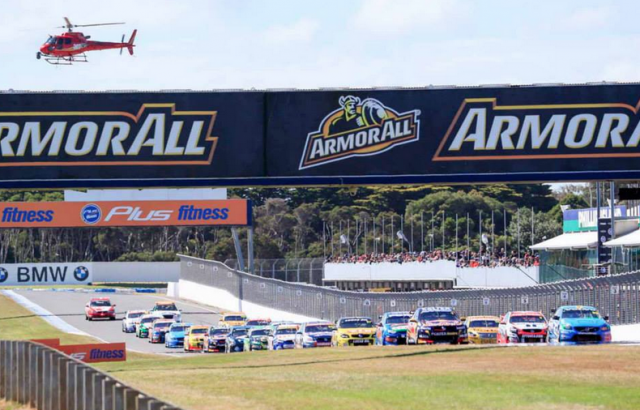 The make-up of the 2015 V8 Supercars Championship grid is edging towards completion ahead of next month’s initial entry deadline.

Last week’s confirmation of Lee Holdsworth’s move to Charlie Schwerkolt Racing appears set to be the final high-profile switch in a relatively stable driver market among the front-running teams.

Dunlop Series front-runner Ashley Walsh is expected to take Holdsworth’s seat at Erebus, which will continue as a Mercedes-AMG customer operation after an earlier failed pursuit of Volvo backing.

David Wall is meanwhile poised to be confirmed as the second driver for Volvo Polestar Racing, following long-time sponsors Wilson Security and Payce Consolidated to the Garry Rogers-owned team.

As revealed on Monday, DJR Team Penske’s second Racing Entitlements Contract appears likely to be used by new Kiwi team Super Black Racing, which is currently facing a fight to run as a fifth car out of Ford Performance Racing’s Melbourne compound.

The return of the three RECs that have sat dormant throughout this season meanwhile sees Super Black and driver Andre Heimgartner with back-up license options, should DJR Team Penske commit to its own second car.

While Tony D’Alberto Racing is expected to seal a long-mooted deal to run a second Holden out of Tekno Autosports, other holders of returned RECs Lucas Dumbrell and Dean Fiore are assessing their options.

LDM will likely expand back to two cars if necessary after leading the legal fight to regain control of its second REC, while Fiore’s may be handed back for good if it cannot be placed at a new home.

Elsewhere, Nissan Motorsport is confirmed to continue as a four-car team but continues to work on finding the backing needed in order to confirm co-owner Todd Kelly’s ongoing position as a driver.

Kelly would add to an otherwise stable Nissan line-up of Rick Kelly, James Moffat and the re-signed Michael Caruso.

Both Moffat and Caruso are expected to be assigned new racing numbers for next season due to the departure of current sponsor Norton, for whom the current #36 and #360 are sported.

Like Nissan, Brad Jones Racing is too said to be aiming for stability in its line-up but is yet to formally conclude deals with Jason Bright and Dale Wood, or announce sponsor continuations.

A new sponsorship package to replace the departing Lockwood on the team’s Fabian Coulthard driven entry is already sorted and will be launched on November 27 at Mercedes-Benz Australia’s head office in Melbourne.

The team is thought to have sourced backing from Alliance Truck Parts and Freightliner; the latter a truck brand owned by Mercedes-Benz.

News of the deal will undoubtedly be a source of frustration for Erebus, which remains without a primary commercial sponsor of its own for next season.

Ingall and Perkins will both be hot properties on the co-driver market, while Dahlgren is expected to return to Polestar’s racing efforts in his native Sweden.

DJR incumbent Scott Pye’s future is also under question, while drivers currently on the outside looking in include Tim Blanchard and Chris Pither, who are both known to have backing available to assist in securing one of the final unconfirmed seats.

See below for Speedcafe.com’s overview of the likely 2015 V8 Supercars field

* Driver yet to be confirmed

** Driver and entry yet to be confirmed