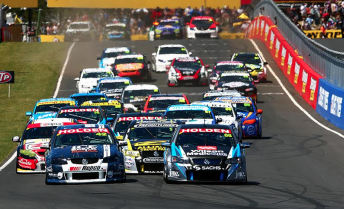 The 250km format will return for a second year at Bathurst

The Dunlop Series will enjoy an unchanged calendar next season, with all seven current events now locked in to return.

The second-tier schedule has been published as part of a final draft of the 2015 V8 Supercars Operations Manual submitted to the FIA for ratification.

As part of the 2015 Operations Manual, New generation V8 Supercars will also be eligible to compete in the championship from 2016, which could see a boost to the Bathurst 1000 grid in the form of wild card entries.

The change will not be made compulsory for teams until 2018.

While Sandown had been part of a first draft calendar presented to Dunlop teams in September, the return of the series to Adelaide, which had been initially in jeopardy, has seen the Melbourne venue remain off the schedule.

Winton and Barbagallo have traded places in the line-up over this year due to the shuffle of the V8 Supercars Championship event order, with the former now Round 2 and the later Round 3.

The near two month break remains before the following round in Townsville, while Queensland Raceway, Bathurst and Sydney Olympic Park again complete the schedule.

The 250km, two-driver format for Bathurst has been locked in for a second year, while formats for remaining events have all been tweaked.

Following the use of 2 x 40 minute races at the remaining six rounds in 2014, each race will next year be scheduled such that it lasts a minimum of 30 minutes.

Two 30 minute races will be held at the Adelaide, Townsville and Sydney street events, while Barbagallo, Winton and Queensland Raceway will each see a third race.

Each race at Townsville, Bathurst and Sydney will continue to have their own qualifying sessions.

The remaining events will see a single qualifying for Race 1 and the grids based on the previous race result thereafter.

Among minor tweaks to Dunlop Series rules, the second-tier series will for the first time have its own number pool next year.

This will allow teams to select car numbers already in use in the V8 Supercars Championship.

Note: Race distances will be scheduled to meet the above minimum time requirements