Felix Rosenqvist added his name to the illustrious list of Macau Grand Prix winners after coming through to win a thrilling finale at the tricky Guia street circuit.

The Mucke Motorsport driver produced a flawless drive to victory in the restarted race with Lucas Auer coming home in second and New Zealand’s Nick Cassidy an impressive third on debut.

Rosenqvist dropped to fourth having started from pole position at the start but was given a second chance as a multiple car accident, triggered by Esteban Ocon and Tom Blomqvist on the opening lap, brought out the red flags.

Yu Kanamaru was lucky to escape unscathed as he launched over the top of Jordan King before landing the other side of the barriers.

Rosenqvist made the most of the start behind the Safety Car to lead Auer before falling behind his Mucke team-mate. But a mistake from Auer shortly after allowed the polesitter to regain the lead which he refused to give up.

The Swede went on to take the victory by 4.3s from Auer while Kiwi Cassidy held firm in third.

Rosenqvist also won the Saturday race finishing ahead of Auer and Blomqvist. FIA European F3 champion Ocon was fourth ahead of Cassidy and Mehri. 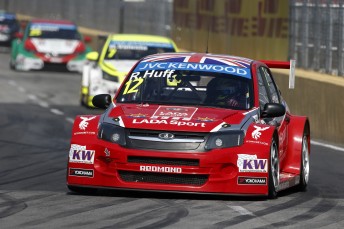 Honda’s Tiago Monteiro appeared to have the race sewn up having opened up a two second lead over Huff and Citroen’s Yvan Muller with just two laps remaining.

However, a late Safety Car wiped out his advantage for the final lap.

Monteiro managed to defend from Huff and Muller into the first corner on the restart but a power steering failure allowed the Lada to grab the lead and take the win.

The victory for Huff was his seventh in Macau and only Lada’s second win in the championship.

Newly crowned world champion Jose Maria Lopez won the opening race of the weekend with a dominant lights-to-flag drive for his 10th victory of the year.

Norbert Michelisz was second with Honda’s Gabriele Tarquini in third. 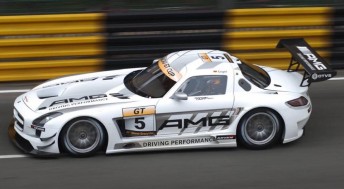 Maro Engel on his way to victory in Macau GT Cup

The result came exactly a year after a puncture on the penultimate lap cost him the victory last season while driving for Erebus Motorsports GT.

“The start worked out perfectly. We had a lot of torque, and that propelled me into Turn 1.

“We put in a lot of effort, and the 1-2 with Renger makes it really special.” Scotland’s Stuart Easton secured his fourth Macau GP win as he cruised to victory in the 48th running of the prestigious race on the Guia street circuit.

The Paul Bird Motorsport rider took the chequered flag by an impressive 14 seconds from Michael Rutter and Martin Jessopp.

“The plan worked, which was to get away in front and settle in for a couple of laps, and try and set a pace that I felt fast enough but still comfortable with so if anyone came with me, we could race at the end.

“It’s nice to win on my return having missed three years, to take pole and to win. I couldn’t have asked more from the tyres, from the bike and from the whole team.”

Nissan driver Tsugio Matsuda secured the Super GT title with victory in the final round of the season at Japan’s Motegi circuit.

The dominant victory saw the #23 GT-R win by over 50 seconds, delivering Matsuda his first Super GT title and co-driver Ronnie Quintarelli his third. Tsugio Matsuda on his way to Super GT success

It is the fourth driver’s title for Nissan in seven years, and gives the flagship #23 NISMO entry championship glory in the first year of the new ‘Class One’ Super GT regulations.

“I’ve been competing in the Super GT for quite some time and I just haven’t been able to get my hands on a championship so I was starting to think that maybe I had missed my chance.

“However, all those worries have enabled me to appreciate this moment even more.

“I want to thank, from the bottom of my heart, everyone in the team who built an incredible car as well as all the fans.”