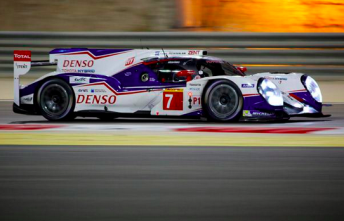 The Toyota #7 cracked its first victory of the season in Round 7 of the World Endurance Championship in the Bahrain 6 Hours.

A week after clinching the European Rally Championship Stephane Sarrazin was part of the winning line-up alongside Alex Wurz and Mike Conway.

Mark Webber, Brendon Hartley and Timo Bernhard’s Porsche was just under 7s away in third place.

But the celebrations were left for the #8 Toyota TS 040 drivers Anthony Davison and Sebastien Buemi who snared the title with a round to spare.

The pair could only manage 11th with their progress curtailed by an alternator failure.

The Audi R18 etron quattro of Marcel Fassler, Benoit Treluyer and Andre Lotterer were fourth but fell two places short of extending the title fight down to the wire at the final race of the season.

Porsche threatened strongly but a maiden win for the 919 fell short when the #14 had to stop with 20 minutes remaining for a drop of fuel.

The WEC Championship will see its final round in Brazil with the 6 Hours of Sao Paulo on November 30.