Jamie Whincup has secured a record breaking sixth V8 Supercars Championship by recording his 87th career win in Race 34 at the Plus Fitness Phillip Island 400.

The Red Bull Racing driver wrapped up the history making sixth title in style with a faultless drive to victory in the 23 lap encounter at the Victorian circuit.

Whincup faced a battle with championship contender Mark Winterbottom in the early stages, but the 31-year-old only needed to finish ahead of his Ford Performance Racing rival to seal the crown with a meeting to spare.

It didn’t take long for the Triple Eight man to find a way through into the lead where he stayed until the chequered flag.

Team-mate Craig Lowndes finished second while Winterbottom was forced to settle for third. 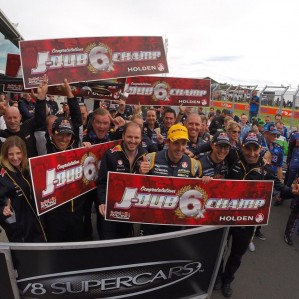 The Gold Coast based-driver has now won the championship in six of the last seven years.

“It’s all a bit emotional at the moment,” said Whincup.

“There’s still plenty of pride on the line from here to the end, but that trophy is going to be pretty sweet come the end of the year.

“I’m just proud of the collective group. About 95 percent have been involved in all six championships.

“I’m sure the numbers will mean a hell of a lot when I hang the helmet up, but right now I just can’t wait to get out there tomorrow and have another crack.”

It was Winterbottom, who made the most of his front row starting position as he just edged Whincup into Turn 1 with Lowndes and the Nissan of Todd Kelly slotting in behind.

There was plenty of action behind in the midfield with David Reynolds and Rick Kelly battling over eighth position.

Tander and Kelly made contact at Lukey Heights on Lap 3 but the Nissan managed to hold on to his fourth position. However, Tander did eventually make a move stick.

Meanwhile at the front Whincup continued to push leader Winterbottom before making a successful move for the lead on the next lap.

Winterbottom soon fell into the clutches of Lowndes, who also slipped by for second spot.

Once out in front Whincup proved to be the class of the field as he went on to take a comfortable victory to claim historic sixth championship.

Lowndes came home in second while Winterbottom just managed to hang on to third, while Tander cruised home in fourth.

Todd Kelly just managed to hold on to fifth spot ahead of McLaughlin, Caruso and Rick Kelly.