The 22-year-old, who secured his maiden Australian GT title at Highlands Park last weekend, is no stranger to the Mercedes-Benz Black Falcon team, having contested the Spa 24 Hours with the squad in July.

Having racked up plenty of mileage behind the wheel of Erebus Motorsport’s Mercedes SLS GT this season, Muscat is looking forward to teaming up with Black Falcon outfit for the Gulf 12 Hours.

“It will be nice to be in an outright ‘Pro’ car this time and have the opportunity to go after the win,” said Muscat. 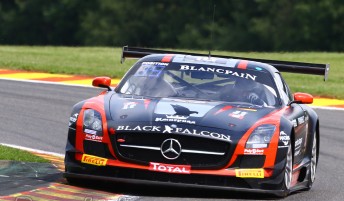 “It’s also great to be back in the same team as Bernd Schneider and Jeroen Bleekemolen, two of the best GT drivers in the world – it will be great to work with those guys again and gain some more valuable experience at that level.

“For me – looking forward – any experience like this against the best drivers in the world in this class of car is fantastic.

“I would like to thank Black Falcon for the trust they’ve put in me to join them once again – like the Erebus Motorsport team that gave me the Australian title – they really are a world class team.”