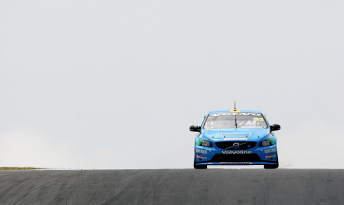 Scott McLaughlin and Jamie Whincup continued their season-long qualifying battle by scoring a pole apiece in the two Saturday sessions at Phillip Island.

McLaughlin’s final lap denied Red Bull’s Craig Lowndes and Whincup a one-two in the first of the two 10 minute hit-outs, which set the grid for Races 33 and 34 respectively.

The Volvo clocked a 1:31.39s, undercutting Lowndes by just 0.09s and cementing McLaughlin’s ninth Armor All Pole Award of the year.

A collision on the out-lap between Fabian Coulthard and Shane van Gisbergen left the two Kiwis to start from the back in both races.

Van Gisbergen elected to pass the three Brad Jones Racing Commodores of Dale Wood, Jason Bright and Fabian Coulthard around the outside at Turn 1.

Warming his tyres, Coulthard swerved into Van Gisbergen’s path, with the resulting contact breaking the left-front suspension of the Lockwood entry and spinning the VIP Commodore across the circuit. 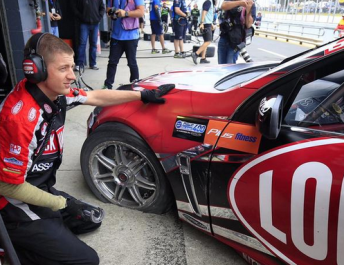 The damage to Coulthard’s Holden

Van Gisbergen made it out for a brief sighting lap at the end of Race 34 qualifying, while BJR failed to return its car to the circuit.

The poor grid positions are a major blow to Van Gisbergen’s quest to finish second in the championship.

“That’s the problem with short sessions, everyone’s on different plans,” he said afterward.

“We were on warm-up tyres warming up the car and they were about to start a run.

“I had my headlights on letting them know I was going to go through and carry on with my own thing but he moved to the right. I thought he’d seen me, but he didn’t.”

The two sessions saw several of the heavy-hitters, including Whincup and Lowndes, only elect to complete one run.

Mark Winterbottom was among those electing for two in the second session and headed the order until Whincup shot to the top with 15 seconds remaining, taking his ninth pole of the year.

Winterbottom improved his own time in the dying seconds to secure second ahead of Lowndes and the Nissan trio of Todd Kelly, Michael Caruso and Rick Kelly.

McLaughlin ended up just ninth after a lock-up at Honda Corner ruined his final lap, which had proven fastest of all to the first sector.

While conditions have been dry throughout the morning, thunderstorms are still predicted to hit the circuit during the late afternoon and evening.