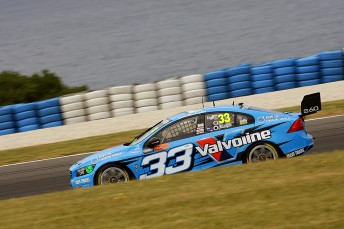 Scott McLaughlin held firm under pressure from Red Bull Racing’s Craig Lowndes to claim his third victory of the season in Race 33 at the Plus Fitness Phillip Island 400.

The Volvo driver completed a lights-to-flag victory from pole position at the Victorian circuit, but it was far from a simple win.

Lowndes and Jamie Whincup chased the Kiwi throughout the 23 lap contest but he refused to buckle under the mounting pressure from the Triple Eight duo, who finished second and third respectively.

Whincup is now likely to wrap up a record breaking sixth championship later today after title rival Mark Winterbottom could only finish in 24th position after a mistake early in the race.

McLaughlin made no mistakes at the start as he led the field into Turn 1 with Lowndes jumping Whincup to slot into second spot.

The Ford Performance Racing duo of Winterbottom and Chaz Mostert moved into fourth and fifth ahead of the Nissan of Michael Caruso.

There was drama behind as Russell Ingall was slow away from the grid which saw him drop right down the order.

At the front McLaughlin quickly began to scamper away with Lowndes in tow, while Winterbottom heaped the pressure on third-placed Whincup.

However, the man on the move was Holden’s Garth Tander as he moved into sixth from ninth on the grid with a pass on Caruso at the hairpin.

But Winterbottom’s charge soon came to an end when he ran wide while trying to pass Whincup around the outside of Turn 1. The FPR driver seemed to have the move completed but was unable to scrub off enough speed to make the corner and ran deep onto the grass.

He was forced to come into the pits to clear grass from the front of his car which dropped him to the back of the pack.

Tander continued his charge up the order as he robustly found his way around Mostert for fourth following Winterbottom’s demise. Mostert lost ground after being forced wide by the Western Australian.

The fight for the victory began to intensify as the race ticked towards the halfway mark with McLaughlin being shadowed by both Lowndes and Whincup.

Meanwhile, Shane van Gisbergen was in the thick of the action as he tried to charge from the rear of the grid. The Kiwi tipped the Nissan of James Moffat into a spin but no action was taken from the stewards.

Van Gisbergen’s wild race continued when he made contact with Dale Wood with two laps remaining. A drive-through penalty was awarded for the collision.

In the end, there was no stopping McLaughlin, who just held off Lowndes at the chequered flag.

“That was awesome fun and it was a great battle with Lowndesy.

“Even in my second year I never thought I would be this successful. You know I have got a long way to go to be like this bloke next to me (Lowndes), but I’m enjoying the ride.”

Whincup hung on to third from a hard charging Tander while Nissan’s Caruso came home in fifth ahead of Brad Jones Racing’s Jason Bright.

“That was a tough battle out there,” said Whincup. The boys were putting out a serious pace and I was just trying to hang on really.

“The tyre life was not the best. Garth had serious pace at the end. If we don’t do something he’ll run over the top of us in the next one.

“The pace out there was crazy so I was happy to hang on really.”