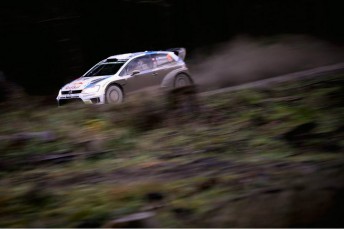 Mikkelsen slick in the mud

Andreas Mikkelsen headed a Volkswagen sweep of the pre-event shakedown for the final round of the World Rally Championship in Wales.

Despite muddy conditions in the 3.32km Clocaenog Forest, Norwegian was the class of the field heading into this weekend’s Wales Rally GB.

He headed world champion Sébastien Ogier and Jari-Matti Latvala, who were both tied 0.3sec behind.

Both Mikkelsen and Latvala recorded their best time on the third of four runs, while Ogier was happy to bring his shakedown to an end after just two passes.

“The feeling with the car was good,” said Mikkelsen.

” We tested in similar conditions at our pre-event test, but maybe it’s a little more slippery here. We made some changes to the car and now I feel well prepared.”

Behind the Volkswagen trio, Robert Kubica was fourth in a Ford Fiesta RS, 0.9sec off Mikkelsen’s pace. Ott Tänak was a tenth of a second further back in another Fiesta RS, with Kris Meeke and Elfyn Evans tied in sixth, another tenth behind.

Henning Solberg damaged the front of his Fiesta RS after crashing during his first run. He completed two more passes before the car was returned to the Deeside service park for repairs.

His car is already well-used. It was M-Sport’s pre-event test car, and was driven for five days by Mikko Hirvonen, Elfyn Evans and Kubica before being converted to RRC spec for Matthew Wilson to use for another day. It was rebuilt for Solberg on Tuesday.

After the shakedown World champion co-driver Julien Ingrassia was announced the winner the Michael Park ‘Beef’ Trophy for 2014. 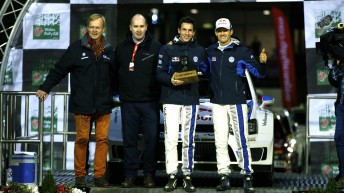 The trophy is awarded annually in memory of Michael, who died in a tragic accident during Wales Rally GB in 2005 while co-driving for long-term partner Markko Märtin.

He has won 23 of his 83 WRC starts and finished on the podium on 34 occasions.