Marquez on top as Miller improves

Marquez on top as Miller improves 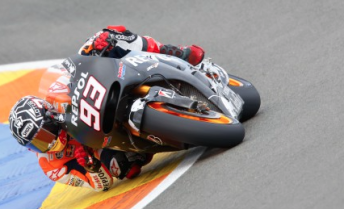 Marc Marquez topped the times on the final day of the MotoGP post season test as Australia’s Jack Miller continued to adapt to his new LCR Honda at Spain’s Valencia circuit.

The Honda rider set the pace from the outset on a damp but drying track before posting the quickest time of the three day test in the final 20 minutes of the session.

The double world champion’s 1:30.973s effort proved to be 0.146s quicker than team-mate Dani Pedrosa who had enjoyed a spell atop the timesheets throughout the day.

Marquez completed 68 laps of the circuit aboard a 2014 specification Honda.

Marquez’s time edged the times set by Yamaha’s Jorge Lorenzo set on Monday by just two thousandths of second. Lorenzo ended the the final day of the test on third spot just a little under two tenths adrift of the pace.

Queenslander Miller managed to record 61 valuable laps after missing out on any running due to torrential rain at the venue yesterday. 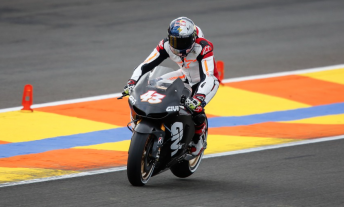 Jack Miller continued to improve aboard the LCR Honda

The Townsville rider ended the test in 22nd position but was only 2.7s adrift of Marquez as the young Aussie continued to adapt to the much more powerful MotoGP machinery, he will race next year.

Miller shaved more than second from his personal best lap time set on the first day of the test.

Having only experienced a Moto3 bike prior to this test, the 19-year-old admitted riding a premier class machine was a physically draining experience.

Miller aims to secure a trainer to help enhance his strength during the off-season.

“We need just more or less bike time to get my strength on the brakes.

“We’re working on getting a trainer and we’re starting a new programme.

“We had to wait for the Moto3 season to be over before we can do it. Building muscle isn’t what we are aiming for.

“We just need to use the muscle we have better so it’s lean.”

Elsewhere, Tech 3 Yamaha’s Pol Espargaro was fourth quickest ahead of the factory Yamaha of Valentino Rossi and Bradley Smith.