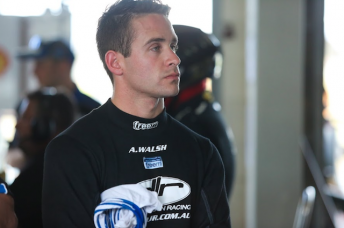 Ipswich driver Ash Walsh is expected to be named as the replacement for the departing Lee Holdsworth at Erebus Motorsport.

Walsh’s appointment will see the 26-year-old move into the #4 E63 AMG for the 2015 season in what will be his first full-time stint in the main game.

Runner-up in the Dunlop Series last year and leading the second tier series in the Matt Stone Racing-prepared Falcon FG until the Queensland Raceway round in August, Walsh has enjoyed enduro drives with DJR for the last two seasons.

Walsh is moving to the Yatala-based Erebus outfit following the shock departure of Holdsworth.

Speedcafe.com has previously sought comment from Erebus however our inquiries remain unanswered.

In a late season twist, Holdsworth is headed for Charlie Schwerkolt’s #18 Ford after the accomplished former long-time GRM racer did not come to terms on a contract extension with Erebus.

Jack Perkins has announced that he will depart after serving just one season behind the wheel of the #18 Falcon.

*Stay with Speedcafe.com for the latest on the driver changes today.