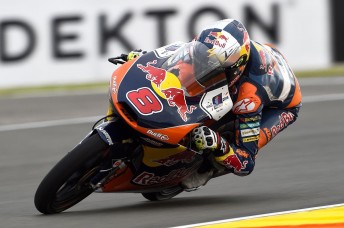 Jack MiIler says he is feeling calm and confident ahead of the Moto3 title decider at Valencia.

The 19-year-old Australian will start Sunday’s race from second on the grid but ahead of title rival Alex Marquez after being pipped to pole position by Niccolo Antonelli.

Championship leader Marquez will start the final race of the season from third position.

Miller, who trailed Antonelli by just 0.068s, exited qualifying feeling positive about his chances in the race, where he hopes to overturn an 11 point deficit.

The Townsville rider will need to score a sixth win of the season with Marquez finishing no higher than fourth to seal the championship.

Although, a podium finish could be enough to steal the crown.

If Miller finishes second he will need Marquez to come home in seventh or worse, while a third place finish would require the Spaniard to finish outside of the top 10.

“We are calm – not overconfident, because in a race you never know what will happen – and we feel ready,” said Miller.

“I’m happy with how everything went. The whole team have done a great job as the bike is working excellently, so we have to be very satisfied.

“I’m excited to start my last race in Moto3 from the front row.

“We’ve been working hard all weekend and I think we have a very good pace for the race, especially with worn tires. The times we have set are also really good.”