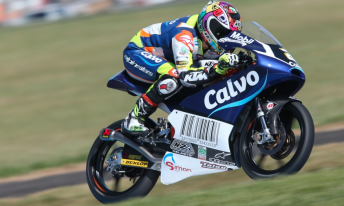 Remy Gardner will step up to Moto3 on a full-time basis next season after completing a deal to join the CIP Mahindra squad.

Gardner was not included on 2015 Moto3 provisional entry list but an opening has become available after nominated Mahindra rider Jakub Korneil announced a move to the new AirAsia team.

The 16-year-old has made three Moto3 starts this year with his last yielding a maiden world championship point after finishing in 15th spot at Sepang.

Gardner has based himself in Spain this season while competing in the European FIM CEV Moto3 series. The young Australian is currently 10th in the championship standings with the final round due to take place at Valencia on November 16.

A move to the Moto3 World Championship arrives 23 years after his 1987 world champion father retired from grand prix racing in 1992.

Gardner’s involvement will also maintain an Australian presence in Moto3 with Queenslander Jack Miller moving from the category to MotoGP’s premier class with LCR Honda next year.