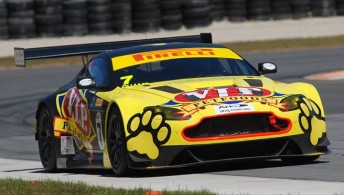 Returning to Tony Quinn’s Aston Martin for the first time since scoring victory at Phillip Island in September, Tander reeled off a late 1:31.86s lap of the Highlands circuit to secure pole.

Erebus Mercedes driver Muscat had been on top for much of the session but ended up 0.24s away from the pace in second.

The result sees Muscat’s championship advantage over Quinn cut to 30 points, with the latter receiving two points as a pole bonus.

Steven Richards took Justin McMillan’s Lamborghini to third ahead of Jono Lester and John Bowe in the leading Ferraris.

The day marked a strong debut for the Lester-driven Trass Family Motorsport 458, which also proved quick in the two earlier practice sessions. The McLaren suffered an oil pump failure in second practice, leaving the team to scurry for a replacement ahead of tomorrow’s two 40 minute races.

Saturday will see a 30 minute warm-up for the AGTC competitors prior to the two races which conclude the season.

The non-championship Highlands 101 will then follow on Sunday, where the Australian entries will be joined by several local competitors.