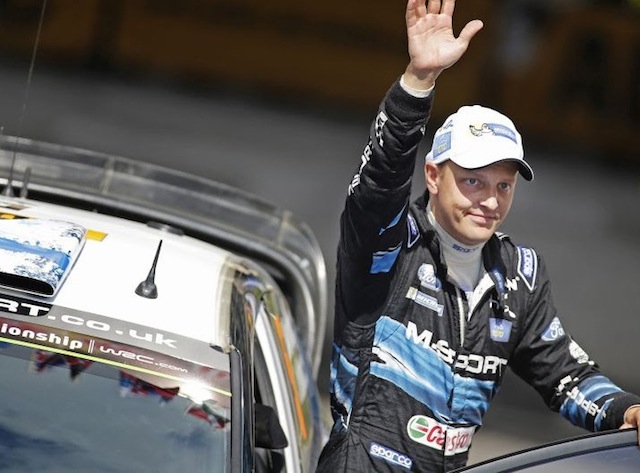 Mikko Hirvonen brings curtain down on his enduring WRC career

After a career at the top level of world rallying spanning 13 years, Mikko Hirvonen has announced his retirement.

The popular Finnish driver will have his final WRC start at Rally Great Britain next week in the M-Sport Ford Fiesta RS WRC.

Hirvonen scored 14 of his 15 WRC victories for Ford and the Cumbria-based M-Sport squad.

“I have travelled all around the world, met some fantastic people and have loved every rally and every fight that I have had with some exceptional drivers,” Hirvonen said.

“I won some and I lost some but, for sure, I will look back on these moments to the end of my days with a great big smile on my face.”

Hirvonen has decided it is time to spend more time with his family and scale back on the rigours of the demanding WRC schedule.

“Throughout the many years of my competitive career, I have focussed on myself a lot. Rallying has taken up a large part of my life and the pace of the calendar has always been fairly unrelenting.

“I have enjoyed absolutely every minute of it and although I still love driving now, I would also like to concentrate more on other important things which are part of my life, like my children and my family.”

Hirvonen has classed the first of his three Rally Australia wins in Perth in 2006 as one of his most memorable.

“I can honestly say that I loved them all. I really can’t choose just one, but I can say that some were particularly significant. Our first win in the World Rally Championship at Rally Australia in 2006 was a very special moment.

“Our win at Wales Rally GB in 2007 was also very special. I remember the podium that I shared with Marcus (Gronholm) and Seb (Loeb).

“Chronologically, the last of my top three but the first in my heart was the win at Rally Finland, on home soil and with my family and friends.

“Mikko [Hirvonen] and Jarmo [Lehtinen] have given the team so much over the years and I look back on our time together with a lot of very happy memories,” Wilson said.

“They formed one of the sport’s most successful partnerships and we shall not forget their talent, determination and commitment.

“They were instrumental in securing back-to-back World Rally Championships for Ford and each of their 14 victories with us holds a lot of very special memories.

“A lot of crews have passed through our doors, but few were held in as high a regard as Mikko and Jarmo who have always been immensely popular members of the team.”

“I speak for everyone at M-Sport when I thank them for everything we achieved together and wish them every success and happiness for the future.”