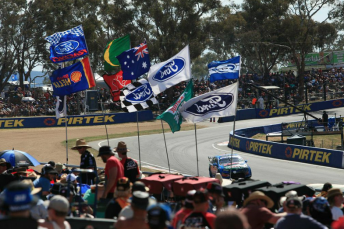 Ford Performance Racing is discussing a raft of options as it anxiously awaits Ford Australia’s decision on whether the Blue Oval will extend its involvement in motorsport.

Among the ideas Speedcafe.com understands has been floated by the Melbourne squad is the possibility of running two different Ford models concurrently.

While the Falcon FG X will underpin FPR’s campaign next season, campaigning two models, such as the Mustang and Mondeo, across its four cars in future has been tabled as a way to maximise the benefit of a reinvestment by Ford.

Such a move would come with initial bodywork costs, but is being deemed a possibility based on the ability to utilise the same chassis architecture and engine packages.

Other discussions being canvassed could see the rival of a dealer-funded racing program, with FPR co-owner Rod Nash stating his desire to have more involvement with the company’s dealer network.

Ford Australia has stood firm on its strategy of not making known its decision whether to press ahead in motorsport until after the final V8 Supercars round – the Sydney NRMA 500 from December 5-7.

Nash has confirmed to Speedcafe.com that negotiations with Ford Australia are ongoing as the squad which have supplied back-to-back Bathurst 1000 victories continues the homologation process of the FG X for next season.

“We are negotiating with them (Ford) and that’s exactly what’s still going on,” Nash told Speedcafe.com

“We are moving forward to get to an agreement. The agreement is not done but we still make the point that there’s elements of stuff that have been agreed to just for us to homologate the car (FG X).

“So if Ford are out they wouldn’t be, and neither would we be, homologating the car.”

In response to the possibility of a Ford Dealer Team being reborn, Nash said that all negotiations continue to filter through Ford’s Broadmeadows headquarters in Melbourne.

“There’s been a lot of discussions on a lot of things,” he said.

“It’s a direct negotiation with Ford. It’s not with individual parties.

“(But) we’ve always activated with the dealers because that’s what we do on a regional basis.

“Ford is doing a lot of work in upgrading the services of dealers with their IT capacities when you buy a car.

“That’s integrating the dealers with the product and the factory a lot more.

“That’s our wish as well. We want more inclusion of the dealers as part of that.”

Amid the homologation process of the FG X, FPR put a case forward to be given permission to use a lighter bonnet and boot lid.

However the bid was rejected by the V8 Supercars Commission which sees the FG X stuck with running steel lids front and rear.