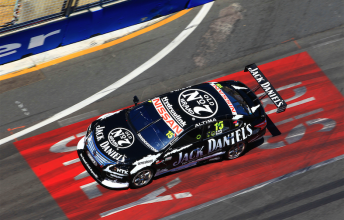 Nissan Motorsport is racing against time to have another revision of its Altima V8 Supercar ready for homologation ahead of the 2015 championship.

Nissan has informed V8 Supercars of its intention to be a part of the off-season aerodynamic testing but, according to team owner/driver Todd Kelly, does not yet have a new package ready to homologate.

The Melbourne-based squad has spent recent months working with Computational Fluid Dynamics partner Total Sim in an effort to further reduce drag from its car.

The drag issue was first identified by the team partway through 2013 and resulted in a re-homologation ahead of this season.

Despite early optimism that the problem had been rectified, Kelly confirmed to Speedcafe.com that his squad is now pushing to ensure that a further improved version of its Altima can be on track in 2015.

The V8 Supercars testing is expected to take place in December, before which Nissan must have its new package designed, manufactured and (privately) tested, ready for homologation.

“The balance of the car is really good, it’s all meeting the targets and the requirements of V8s in terms of downforce, but the way we’re achieving it is still creating too much drag,” said Kelly.

“We’ve been working for a lot of this year with CFD to try and work out how to do it (reduce drag).

“If we can achieve it we’d certainly like to revisit it (homologation) because it’s pretty clear the amount of times we get passed on the straights in the races (that drag is an issue).”

The biggest change to the Altima for 2014 was the moving of its rear wing upward and outward via extended mountings. 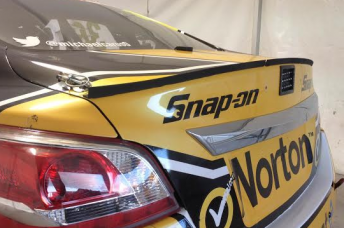 The bootlid Gurney on the Altima, pictured with its rear wing removed for transport

This was done after testing found that the original package was producing a high-pressure area on the boot and rear window at speeds over 200km/h, giving an undesired pressure reflection on the rear wing.

The problem was largely blamed on the size of the bootlid Gurney, which exists to attach the airflow to the wing’s underside.

With any reduction of the Gurney resulting in a costly downforce loss, the decision was made to move the wing further up into the free airstream.

“All of the testing that we’ve done, we’ve never been able to get it (the rear wing) to work any lower or further down,” explained Kelly of the wing’s repositioning.

“That’s with a lot of CFD work and a lot of physical aero testing. It (the position) is one of those things that we’re revisiting, more within where the other cars in the category are.”

Kelly says that the team is also reassessing the end-plate mounted wing design that it tested during private running at Avalon Airport last November.

Defending his team’s efforts with the aero package, the former Bathurst winner says that the fundamental shape of the Altima has made the car’s V8 Supercars homologation more difficult than that for other manufacturers.

“The amount of work that’s gone in with high-end companies and clever people with CFD is probably a lot more than the other teams have done to get where they are,” he said.

“If you look at the shape of the car it’s massively different to the others, even compared to the Volvo in terms of windscreen angles and so on.

“It’s a lot different and it’s been a challenging car to get to work within the criteria.

“It’s a lot more than just looking at the shape of the car, adding the downforce and ending up with the some drag as the others.

“It’s completely dependent on the shape as the car as to what you can achieve.”

Nissan hopes to combine a revised aero package for 2015 with a major early season engine upgrade.

Although stressing that aerodynamic drag is the bigger factor in its lack of straight line performance, Kelly expects that a long-awaited revised cylinder head design will finally see its VK56DE engine on the pace of the front-runners.

“We’ve been slightly improving the engine all along, but we’re not going to get to the power limit until we can get these new cylinder heads on the cars,” he said.

“It probably won’t be until probably the third or so round next year before we can get the first few sets of heads machined and have them developed.

“Where we’re at is where we’ll be now for a while on the engine (until the new heads are implemented).

“It’ll be a reasonable chunk (of performance improvement), but until we run it we won’t know if it puts us just over or under,” he added.

“We’ve already designed everything that this engine is going to have in terms of the chambers, ports and so on and we’re just waiting for the heads.

“It looks like there’ll be some pretty good gains, but we’re just hanging out now until the time that it all lobs here so that we can machine the parts up.”