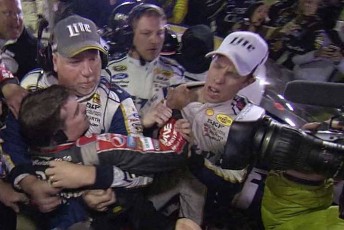 Gordon and Keselowski duke it out in Texas

Jimmie Johnson has come through to win the AAA Texas 500 but the race was marred by an ugly all-in brawl.

The second half of the race featured 12 yellow flags including one after the first attempt at a ‘Green-White-Chequered’ finish when race leader Gordon spun after cutting a tyre from contact with Keselowski on the re-start.

Gordon went on to finish 29th while Keselowski finished third behind Johnson and Kevin Harvick.

As the cars parked on pit road a massive contingent of crews, officials and the media were waiting for something to happen as Gordon parked right beside Keselowski.

Words between the two quickly escalated and even Harvick was seen to push Keselowski from behind as a brawl erupted. Both drivers sported battle scares on their cars and faces in the process.

“He’s got to pay the consequences. The kid is doing stuff way over his head.” 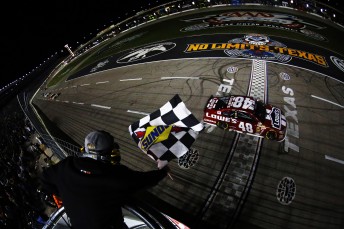 Keselowski, who also got involved in a scuffle with Matt Kenseth three weeks ago at Charlotte said it was all part of hard racing.

“We were just racing for the win,” said Keselowski .”

“Racing hard and … in the hole. Everything you watch in racing, if you leave a hole, you’re supposed to go for it. It closed back up; we made contact. I don’t want to ruin anyone’s day. I wanted to win the race, and that was our opportunity. Just didn’t come together.

“I’ve been through a lot of rivalries, and I’ve got a little blood on me right now. I’ve been roughed up, put in the grandstands and wrecked and done all that stuff. I’m still here fighting. I’m not going to change the way I race. I race with 100 percent intensity and go for the win. That’s what the fans deserve in NASCAR.”

For Johnson the result might have come two races too late for him to fight for the championship, but it was his fourth victory of the year and his third-straight in the 500-mile race at Texas Motor Speedway.

Like last week where Dale Earnhardt Jr. won at Martinsville, none of the final eight drivers still in contention for the Sprint Cup gained automatic entry to the final stage at Homestead-Miami in two weeks time. This means next weekend’s race at Phoenix is sure to once again see intense racing and plenty of emotion.

It proved a wild race for Marcos Ambrose who came back from two laps down to be in with a shot of a top-10 finish. However, heavy contact with a sliding Kasey Kahne took the steam out of the Australian’s chances. Fighting with the damage, Ambrose swiped the wall late to finish 27th.

VIDEO: The on-track incident that sparked the fight