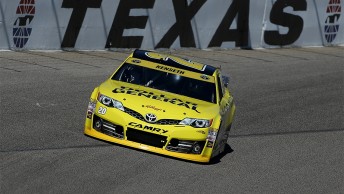 Kenseth will start from pole in Texas

Matt Kenseth scored the pole for the AAA Texas 500, but it was Tony Stewart’s 200 mile per hour lap that grabbed the headlines.

It’s his second pole of the season, 13th of his Sprint Cup career and first on the 1.5-mile track in the heart of the Lone Star State.

”That was probably the right time for us to go,” said Kenseth about the timing of his run in the final segment.

”I don’t know how much difference it made or if it made any difference, but it seemed like a good time.”

Another one of the eight championship contenders, Jeff Gordon, was second-fastest. His speed was just one-thousandth of a second slower than Kenseth’s fast time.

The early evening qualifying session featured fast speeds, including the fastest official laps in the sport’s history on a 1.5-mile track. Tony Stewart led the charge in the second of three qualifying segments with a stunning 200.111 mph (322.047km/h) lap, just under the 27-second mark.

”To be able to say we’re the first guy on a mile a half to run 200, that’s pretty cool I think,” said Stewart

”Of course we were trying for the pole, but I missed the corner a little bit.”

The lap was significantly faster than the track record of 198.282 mph (319.104km/h) that Harvick registered in the first leg of knockout qualifying at the Fort Worth track in April.

Making his third last start in the NASCAR Sprint Cup Series before returning to Australia, Marcos Ambrose will start from 16th.

“These are fast lap times and you really need a perfect lap,” said Ambrose.

“We were really consistent. We were 17th in the first round and ended up 16th. The car has good speed. We lost some grip, but the DeWalt Ford isn’t bad.”