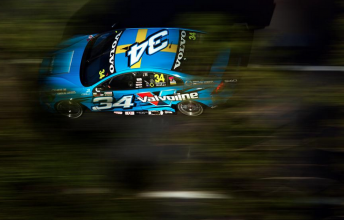 Dahlgren has endured a torrid rookie campaign and is set to return to his homeland at year’s end.

A 10-year veteran of Polestar’s European touring car exploits, Dahlgren was pressed into the V8 Supercars squad by the Swedish firm as part of the new-for-2014 Volvo alliance.

The move forced GRM to end Alex Premat’s three-year deal a season early, leaving the Frenchman to move home, returning to V8 Supercars in an endurance co-driver capacity only.

While Polestar’s Scandinavian Touring Car Championship drivers Carl Philip Bernadotte, Fredrik Ekblom and Thed Bjork visited the recent Castrol Edge Gold Coast 600, Dahl has confirmed to Speedcafe.com that the choice of driver for the #34 will this time be left up to Rogers.

“Having a driver from Sweden here helped gel everything together, but now that we’re up and running and GRM and Polestar know each other better, it is easier to communicate without having people on site,” said Dahl.

“I think it’s a good way, to bring new (young) drivers into the team like Scott (McLaughlin), who has done really well.”

Long-time Wilson Security backed driver David Wall has been strongly linked to the #34 seat for 2015, but was not part of the weekend’s confirmation of the sponsor’s new naming rights deal with the team.

Wilson Security is also yet to confirm plans for its other sponsored entry, the #21 at Brad Jones Racing, leaving another possible slot for Wall should Rogers successfully push for a younger talent, such as Scott Pye.

Embarrassingly for Dahlgren, his visiting compatriots watched on as co-driver Greg Ritter was selected to do the bulk of the driving duties in the #34 at Surfers Paradise.

Ritter, a Melbourne-based plasterer, dragged the car to 18th in qualifying for the two races; three places ahead of Dahlgren’s season average.

“I think that Robert has paid off in terms of engine development and stuff like that, but of course he was hoping for better results on the race track,” reflected Dahl of Dahlgren’s season.

“If we had bigger problems with engines in the beginning of the season then I think we would have had more use of Robert’s engineering skills.

“Everything went quite smoothly in the beginning of the season but of course we didn’t know that beforehand.

“(But) during the season, we were both hoping for better results.”

Dahl added that the array of technical problems that beset Dahlgren’s car during the early part of the season was not the result of the Swede being used as a development driver.

“The same things have been on both cars, it’s not that we’ve been trying anything or taking bigger risks on Robert’s car,” he said.

“You see anywhere, like this year in Formula 1, you can have a bad season (with reliability) sometimes.

“From a team perspective I think it’s been lucky that Scott’s car has been the one running more reliably.

“If it had been the other way around it would have really compromised the results.”