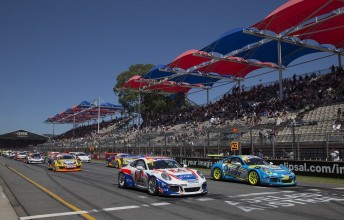 Carrera Cup will start again at the Clipsal 500

Organisers of the Australian Carrera Cup Series have announced an unchanged eight-event calendar for 2015 plus a dedicated test day at Phillip Island.

The series will consist of seven confirmed sprint rounds plus one mini-enduro pro-am event. Once again the series will be seen at the Clipsal 500, Australian Formula 1 Grand Prix, Townsville 500 and the V8 endurance rounds at Sandown, Bathurst and the Gold Coast.

The other rounds will be as part of the Shannons Series at Phillip Island in late May and the V8 Supercars round at Sydney Motorsport Park in August.

Organisers are expected to confirm one of the aforementioned events to be the pro-am event.

The test day at Phillip Island on Thursday February 12 is seen as a great opportunity to prepare for the season ahead and allow teams to unveil driver line-ups and liveries.

“This Carrera Cup calendar outlines many exciting aspects of the 2015 season. Not only will we see Porsche racing at the best venues in Australia, but we will also receive great exposure from our presence at six signature events in 2015,” said Porsche Cars Australia Director of PR and Motorsport, Paul Ellis.

“From our on-track presence, professional presentation and high level of exposure for our teams and partners, Porsche will continue to provide a premium experience for those involved in Carrera Cup.”

As well as the announcement of the location of the pro-am event, organisers in the coming months will detail the final TV package which is anticipated to see extensive broadcasts of each race, plus further coverage of practice and qualifying.

Amongst the line-up will be Sam Power who recently took part Porsche International Cup Scholarship following a shoot-out at the Valencia Circuit in Spain. 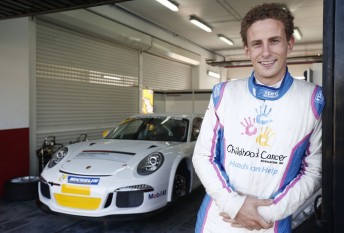 Although he didn’t win the 200,000 Euro toward a 2015 Porsche Mobil 1 Supercup campaign, Power did impress the judging panel and he is aiming to put that into good use in his second season of the Australian Carrera Cup.

“As cliché as it will sound, I never thought I would get a chance like this,” said Power.

“The chances of me even being able to make a career, or even get to the stage where I could, starting age 20 in motorsport was always absolutely minuscule. So to have this chance from Porsche is the greatest accolade I have ever received. I hope it’s a great example for all those who are unsure if they can make it, to just keep trying with everything.

The 18-year-old Italian Matteo Cairoli won the scholarship which along with the cash prize also includes Porsche works driver Sascha Maassen accompanying him to all race weekends as a driver coach.