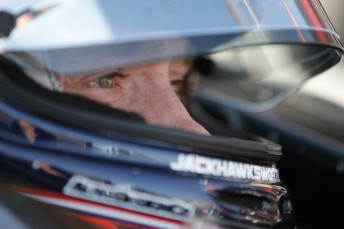 Hawksworth was confirmed to run in the #41 car with longtime backer ABC Supply extending its commitment to the end of the 2016 season.

The expansion will see the 2014 Tony Renna Rising Star Award recipient join incumbent Takuma Sato who returns for a third year in the #14 machine.

Hawksworth will be engineered by Raul Prados, who has studied under Sato’s chief engineer Don Halliday.

The cars will run Honda engines and use the new body kits which will debut early next season.

“It’s great having the continuity of Takuma Sato and Don Halliday working together for another year. We know Takuma can win on any given weekend in the #14 car,” team director Larry Foyt said.

“I’m looking forward to putting what we’ve learned together the last couple of years to good use. As well, having who I feel is a future superstar — Jack Hawksworth — join the team gives me twice the reasons to be excited.

The 23-year-old Hawksworth recorded a best finish of third in the second race at Houston after a storming start to the season which saw him qualify in the top six in three of the first half dozen races in his maiden year with Bryan Herta Autosport.

“Ultimately, I want to win races and I feel that this is the place I can do that,” Hawksworth said.

Meanwhile IndyCar is set to release its final draft calendar for the 2015 tomorrow.