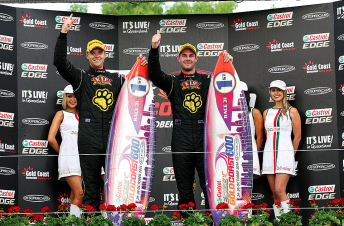 Webb and Van Gisbergen on the Gold Coast podium

Tekno Autosports owner Jonathon Webb has declared interest in again looking outside his own team for a Pirtek Enduro Cup drive next season.

The 30-year-old stepped back from full-time driving this year, joining Shane van Gisbergen in Tekno’s single-car attack on the three endurance races.

As expected, the pairing proved formidable, finishing third in the Enduro Cup standings after a campaign that included a race win on the Gold Coast.

Driving with Van Gisbergen had only been a fallback for Webb, however, after a deal to co-drive with Garth Tander at the Holden Racing Team was blocked by Tekno’s technical partner Triple Eight.

While Tekno’s customer association with Triple Eight will continue next season, Webb insists that returning to the co-driver seat for his own team is no certainty.

“Obviously we had another option earlier on this year to drive somewhere different.

“That was about seeing where I was as a driver because I’ve always driven under my own banner, paid my own way and looked after myself.

“It was nice to be called upon by one of the bigger outfits and see what the other side of the fence looked like.

“I’m not saying it definitely will or won’t happen again in the future, but we’ve just got to wait and see.”

Regardless of co-driving options, Webb stressed that his strong Enduro Cup form has not changed his perspective on full-time driving.

“The reason why I started Tekno is because I wanted to drive race cars and that drive and passion is always going to be there,” he said.

“But I’ve got a wife and a kid at home now and quite a big business in Tekno, both on the racing side and road car side, to look after.

“I’m not going to be driving a race car forever but I want to make a good living out of cars, so I won’t be sacrificing anything just to get back behind the wheel.”

As reported on Sunday, Tekno remains in talks to return to a two-car program next season, most likely by running its second Triple Eight-built Holden for Tony D’Alberto.

“It’s probably a fifty-fifty still, it could go either way,” said Webb of the second car.

“For us it’s got to happen sooner rather than later to ensure we can do it the right way.

“My other car hasn’t been touched since Homebush and it needs a bit of work, as well as the fact that accumulating good staff doesn’t happen overnight.

“There’s still a chance but I’m not too concerned about it. The focus is on the #97 and making sure that Shane has as good a chance as any to give Jamie a run for the championship next year.

“What has let us down this year have been things, whether it be pace or reliability, that wouldn’t have mattered if we had one car, two cars or 10 cars.”

Tekno’s quest for back-to-back Gold Coast wins came unstuck on Sunday thanks to a mid-race drive-through penalty, issued for Van Gisbergen over-lapping with Scott McLaughlin’s Volvo prior to the Safety Car being declared by Race Control as in pitlane.

While Webb was cautious in passing comment on the penalty post-race, Van Gisbergen was incensed by the immediate nature of the penalty, which saw him drop down to 19th place.

The incident came a day after Paul Dumbrell passed McLaughlin on a similarly packed restart, which the Red Bull driver subsequently redressed and escaped sanction.

“Whether it’s right or wrong to get the penalty, I’m pissed that we didn’t get to redress it, like others have done in the past.

“We came back through to fifth but we should have had the opportunity to race Jamie for the win.

“It’s a hard one to take because we had a good shot at getting another surfboard (trophy).”

Salvaging a fifth place finish ensured Van Gisbergen moved to third in the drivers’ standings ahead of the penultimate round of the championship at Phillip Island.

“It’s good to be third in the championship but we’ve got to improve because Phillip Island is typically a good Lowndes and Winterbottom track,” he said.

“We know we’re good in Sydney but Phillip Island will be the tough one for us.”