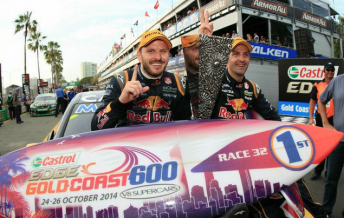 Paul Dumbrell will sit down with Red Bull Racing Australia in the coming weeks to determine whether or not he’ll return to defend the Pirtek Enduro Cup title alongside Jamie Whincup in 2015.

Dumbrell’s commitment to driving remains a year-to-year proposition due to his workload as CEO of Automotive Brands.

The now 32-year-old ended his full-time driving career at the end of 2011 to focus on the company, but has returned for each endurance season alongside long-time friend Whincup.

The pair won September’s Wilson Security Sandown 500 and Sunday’s second leg of the Castrol Edge Gold Coast 600 on their way to the Pirtek Enduro Cup title.

The results reflected a strong personal performance from Dumbrell, who squeezed a season-long Dunlop Series campaign into his calendar this year in order to sharpen up his driving after a mistake-riddled 2013 enduro tilt.

Dumbrell admits that he must again be able to commit to a pre-Enduro Cup racing schedule of some kind in order to be ready for the big races.

“I’d absolutely love to (continue) because it’s a boyhood dream to go and race a car with the best team and with one of the best drivers in the category.

“But I’ll only do it and consider doing it if I’m prepared and comfortable that I’ll do a good job.

“I’m not in it just to race in those events, there’s a lot of onus put on the co-drivers, especially when Jamie is battling it out for the championship.

“If I feel that I’d be overstepping the mark (by going in under prepared) I’ll put my hand up and say I’ve had a great crack, let’s move on and do something else.”

Dumbrell will race in the Dunlop Series finale at Sydney Olympic Park in December despite having both the Enduro Cup and the second-tier title already in the bag.

The Victorian had initially discussed committing only to selected Dunlop Series outings this year, but ended up with a full season deal with Triple Eight customer squad Eggleston Motorsport, largely due to the class’ entry regulations.

Under the rules at the start of 2014, Bathurst 1000 co-drivers wishing to compete in the highly valued Dunlop Series race at the same meeting had to run in at least four of the second-tier rounds prior to the October classic.

The late advent of the two-driver format for the Bathurst Dunlop Series round, however, eventually saw extra opportunities for those without full-time Dunlop programs to join the field.

Dumbrell says that the driver eligibility rules next year will be one of several factors in discussions over a return.

“If I want to keep on racing the enduros I’ll have to keep racing a car,” he said.

“What that car is is a question mark, but it makes sense to do the Dunlop Series.

“When we make our decision it’ll come down to a lot of factors. Whether I want to do it (the Enduro Cup), what the rules are and whether or not there’s an opportunity at Triple Eight, which you should never take for granted.”

A well publicised aim of one day competing in October’s annual World Ironman Championship in Hawaii has also previously been touted as a possible reason for Dumbrell to skip future Enduro Cups.

However, with top ironman competitors typically continuing at the top level into their 40s, Dumbrell says the world championship will not be a major factor in decisions for next year.