Citroen’s Jose Maria Lopez has won the 2014 World Touring Car Championship in his maiden season after securing his ninth victory of the campaign at Suzuka.

The Argentine driver produced an impressive lights-to-flag win from pole position as he claimed the title in style.

Virtue of a highly successful season, Lopez only needed to finish fourth in the opening race of the meeting to seal the crown.

In becoming champion, he is the first Argentine world champion in motorsport since Juan Manuel Fangio’s fifth F1 world championship victory in 1957.

The Chevrolet of Tom Chilton finished second as he took advantage of a retirement for outgoing world champion Yvan Muller, who slowed on lap seven while occupying second spot.

Sebastien Loeb capitalised on a error from Hugo Valente to snatch the final place on the podium in third.

Gabriele Tarquini gave the factory Honda squad their first win of the season in the reverse grid race.

Dusan Borkovic came home in second just 1.7 seconds adrift of the Italian, while the Zengo Motorsport Honda of Norbert Michelisz was third.

The World Touring Car Championship heads to Macau for the final round of the season on November 13-16. 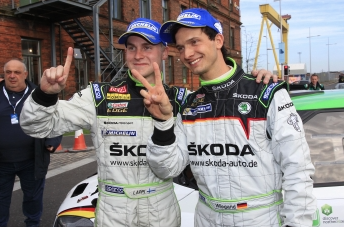 Esapekka Lappi edged closer to wrapping up the European Rally Championship title after taking a convincing victory in the Rally of Valais in Switzerland.

The Finn clinched his third win of the season by 42 seconds from Ireland’s Craig Breen with his team-mate and title rival Sepp Wiegand in third.

Lappi’s triumph has moved the Skoda driver into 34 point lead over Wiegand with just 39 points left to play for at the season finale in Corsica (November 6-8).