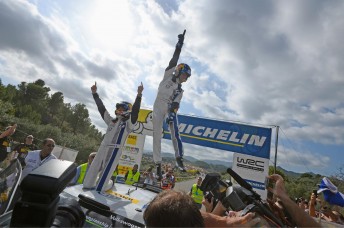 Sebastien Ogier has won his second-straight World Rally Championship title in style by finishing first at the Rally de Espana.

He took victory by 11.3sec over Volkswagen team-mate and the only man still in contention to win the title, Jari-Matti Latvala The Frenchman becomes the eighth driver to lift the title more than once and all with one round remaining.

Ogier built a comfortable lead on the first full day of the mixed-surface event. Latvala, who was disappointed with his speed on that gravel leg, attacked hard during the final two days on asphalt but Ogier had his measure.

“It’s a great achievement to win one title but even better to take a second,” said Ogier.

“It’s a confirmation and proves the first title was not a one-off.

“It’s been a fantastic weekend, but it was tough. I pushed so hard on leg one and it was a long two days on Tarmac where I had to watch Jari-Matti flying. I had to be clever and keep watching him all the time,”

Ogier’s victory was the 23rd of his career and Volkswagen’s 11th of the season, equalling the record set by Citroen in 2005 and 2008.

Mikko Hirvonen’s third place in a Ford Fiesta RS was his second podium of the year, the Finn too strong for Mads Ostberg and Andreas Mikkelsen on asphalt. He finished 1min 42.2sec behind Ogier and 31.1sec ahead of Ostberg, a Saturday afternoon puncture ending Mikkelsen’s hopes.

Dani Sordo closed on Ostberg throughout the final leg in his Hyundai i20 but the Spaniard fell 8.9sec short in fifth.

Mikkelsen passed Thierry Neuville for sixth in the penultimate stage. However, he incurred a 10sec penalty after a timing error at the start of the final test and dropped behind again.