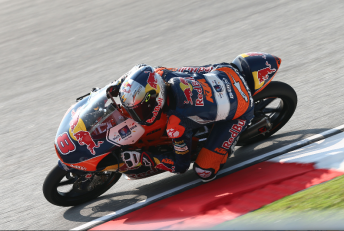 Jack Miller has reduced Alex Marquez’s Moto3 championship lead to 11 points after being pipped to victory in the Malaysian Grand Prix by Efren Vazquez.

Miller had led the majority of the race but was denied victory at the final corner of the last lap as he trailed Vazquez by 0.213s at the chequered flag in Sepang.

The Townsville teenager’s title rival Marquez finished in fifth behind Alex Rins and Danny Kent which has ensured the Moto3 championship will be decided at the final round in Valencia.

Having started from pole, Miller made a bright start placing himself in the top three on the run to the first corner with Vazquez leading Isaac Vinales.

The race developed into a thrilling scrap amongst the top five with nobody able to break free at the front.

Miller enjoyed several spells in the lead as the race edged towards the final lap.

The young Aussie appeared to be in the box seat to take victory having managed to hold off both Vazquez and Rins for the majority of the final lap.

However, Vazquez made the most of the tow on the final straight to pass Miller and take the win from the Queenslander, while Rins finished on the podium in third.

Miller will be vying for the Moto3 title at the final round of the season at Valencia on November 9.