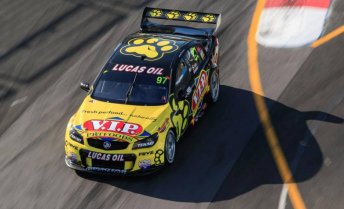 The win comes just two weeks after a mistake from Van Gisbergen in the final pitstop ended a strong run for the duo at Bathurst.

Van Gisbergen emerged from a strategic battle in the opening 300km Gold Coast heat with a narrow lead over Jamie Whincup at the start of the final stint.

With fresher tyres, the Kiwi was then able to manage the gap to the Red Bull Holden until the chequered flag.

Mark Winterbottom crossed the line third but was demoted one place for bumping Tim Slade out of the way at the final corner.

The Supercheap Auto Holden driver had been struggling without a working drink bottle, cool suit or helmet fan in the closing stages, but still delivered a maiden podium for co-driver Tony D’Alberto.

Michael Caruso/Dean Fiore scored fifth for Nissan ahead of Chaz Mostert, who was forced to race his way back onto the lead lap after co-driver Paul Morris struggled in the early stages.

Seventh was Scott McLaughlin, who had been one of just four primary drivers to start the race in a strategy that was eventually hurt by a mid-race Safety Car.

The lap 51 yellow defined the strategies at the front, with Whincup and Winterbottom among a handful not to use the opportunity to top up with fuel.

Van Gisbergen led those that did and, while needing to make a third stop to see the chequered flag, the fuel-in-hand advantage was enough to see the Tekno Holden eventually rejoin from the final cycle in front.

Garth Tander was set for third after the final stops but tyre-bundle inflicted damage to his car’s left-front corner eventually cut a tyre, resigning him to a 10th place finish.

Craig Lowndes also saw a strong result disappear when a lengthly stop was required to fix front splitter damage in the closing stages. Lowndes eventually finished 18th in another major blow for his championship hopes.

James Courtney also lost major ground in the standings after co-driver Greg Murphy tangled with a slow-starting David Russell, spinning the HRT entry into the concrete and triggering a Safety Car.

David Reynolds was the race’s other major casualty, causing the mid-race yellow after an aggressive hit on the Turn 9 tyre bundle saw a front-end failure and subsequent trip into the Turn 12 concrete.

Qualifying and a second 300km race will complete the Castrol Edge Gold Coast 600 on Sunday.