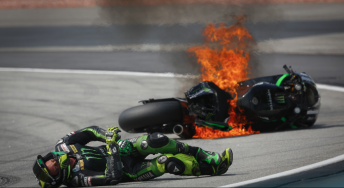 Monster Yamaha rider Pol Espargaro has suffered a fracture to his left foot following a fiery high side in third practice session for the MotoGP Malaysian Grand Prix.

The Spaniard was launched from his Yamaha at Turn 1 with three minutes of the third practice session remaining at the Sepang circuit.

His bike then burst into flames before he was stretchered away from the incident.

The crash brought out the red flags while Espargaro was quickly taken to the circuit’s medical centre, where he was diagnosed with a second metatarsal fracture in his left foot.

It is understood the reigning Moto2 champion also complained of right hand pain after the crash.

The cause of the accident remains unclear reports suggest liquid was seen leaking from his bike but it is not certain if the events are linked.