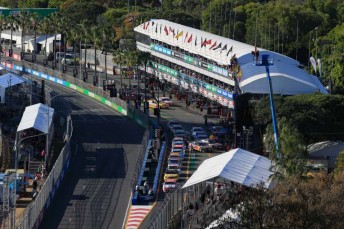 The V8 Supercars lined up at Surfers Paradise

The V8 Supercars Racing Entitlements Contract holders have agreed to a revised distribution model that will see them retain their current equity in the sport.

V8 Supercars CEO James Warburton has confirmed to Speedcafe.com that an agreement was reached at the annual team owners’ meeting on the Gold Coast.

“The shareholders have agreed a distribution model that works for the long term sustainability of the teams,” he said in a statement.

As previously reported, V8 Supercars had been working for some months on ways to increase the sustainability of its teams.

The teams have had to fund their racing without REC revenues over the last 18 months; a squeeze compounded by a difficult sponsorship climate.

While Warburton refused to be drawn on details, it is understood that the proposed model of teams divesting their 35 percent shareholding to current majority owner Archer Capital in return for a guaranteed income will not go ahead.

Instead, the revised distribution will likely see the REC holders retain their equity while being granted a larger percentage of the business’ profits than they had previously been entitled.

Importantly, next season is the first in the six-year, $241 million Fox/Ten media rights deal that has been hailed as a major boost to the category’s coffers.

While the guaranteed income proposal included a stipulation for no more than 25 cars, the grid size will be free to swell back to 28 under the new agreement, should demand allow.

The fate of the three RECs handed back last year is yet to be determined, with V8 Supercars and Lucas Dumbrell Motorsport in continued legal action over the matter.

Court documents confirmed earlier this month that the LDM and Triple F RECs were absorbed by V8 Supercars for $20,000 each after a tender process failed to attract bids.

The previous REC transaction, which took place late last year, is thought to have fetched approximately $800,000.