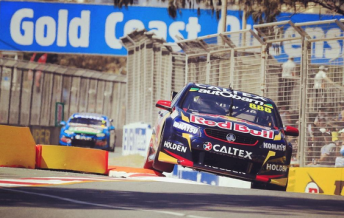 Steven Richards put Red Bull Racing Australia at the top of the time sheets in the first of two co-driver practice sessions at the Castrol Edge Gold Coast 600.

The 30 minutes provided the part-timers with their first look at the re-profiled chicanes.

Ten drivers were issued 60 second stop-go penalties during the session for each breaching the track limits, as determined by the electronic kerb sensors, on four occasions.

Richards recovered from a mid-session trip down the Turn 12 escape road to clock a 1:11.6s best in the dying seconds.

The time demoted Nissan’s David Russell to second, who had in turn edged Tony D’Alberto with a late flyer.

D’Alberto spent much of the session atop the order on the way to his eventual third ahead of fellow Holden drivers Jonathon Webb and Paul Dumbrell.

Bathurst winner Paul Morris ended up slowest in the #6 FPR Falcon, 2.7s away from Richards’ pace.

Ashley Walsh managed just eight laps after clipping the concrete and breaking an upright in the #16 DJR Falcon that Scott Pye had taken to first in opening practice.

The second of the co-driver only sessions will get underway at 1340 local time.