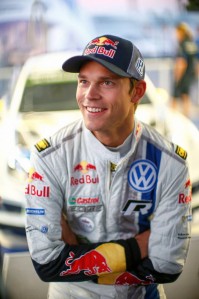 Over the 3.2km stage around the Montjuïc hill, the former site of the Spanish F1 Grand Prix and 1992 Olympic Games, the Volkswagen driver was 1.8sec quicker than team-mate Sébastien Ogier with Thierry Neuville’s Hyundai i20 a further 1.1sec behind in third.

“We’ve used some of tomorrow’s allocation by scrubbing the tyres but we gained time. Maybe it will pay off or maybe not, but I’m happy with my decision,” said Mikkelsen.

Neuville estimated he lost half a second by initially attempting a ‘donut’ in second gear rather than first, while team-mate and local hero Dani Sordo believed his car lacked power exiting tight hairpin bends.

Nevertheless Sordo was fifth, 0.2sec behind the Jari-Matti Latvala’s Polo R and 0.4sec clear of Kris Meeke in sixth.

Ken Block, starting his first WRC round this season, swiped the barriers at the first corner in his Ford Fiesta.

“The tyres were colder and slicker than I thought and it went way wider than I expected,” said the American.

Although the street stage was on tarmac tomorrow’s stages are on gravel in the Tarragona region. They tackle two identical loops of three tests covering 138.54km.