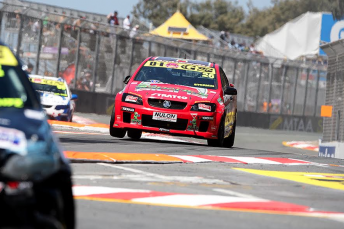 Rhys McNally topped the times in the Australian V8 Utes

Rhys McNally proved the man to beat as he topped the times in practice with a new lap record ahead of the penultimate round of the Australian V8 Ute Racing Series at Surfers Paradise.

After taking victory at Mount Panorama two weeks ago, the Holden driver posted a 1.25.0133s effort in the opening practice session.

But it was a bittersweet day for McNally as a blown radiator saw him finish in 13th spot in the second practice session.

“We made a flying start in practice one, our times got quicker through the session and to pull out the fastest time towards the end was a great feeling,” said McNally.

“It really shows that we have picked up where we left off at Bathurst and gives the team a great start to the weekend. To get the practice record was another great achievement as well and is a testament to the hard work by the Sieders Racing Team.”

“It was unfortunate to suffer the blown radiator hose in practice two but I feel like we are firmly in place to come out in qualifying in the morning and set a quick time to put us at the front for the races which will be so critical.

“There aren’t many passing opportunities around here so I need a fast time from the outset.”

Walton, from nearby Yatala, starred in the second free practice session with his Ford atop of the timesheets for the majority of the session.

The second half hour hit out was halted with 12 minutes remaining when an incident triggered by Jeremy Gray, who clipped the wall at Turn 13. The contact with the wall left his Ford broadside in road which was then collected by Harris and Philip Woodbury.

Elsewhere, title contender David Sieders clocked the fifth fastest time overall as he trailed Walton in second in the final practice session of the day.