Ogier to remain at VW as new deals struck

Ogier to remain at VW as new deals struck 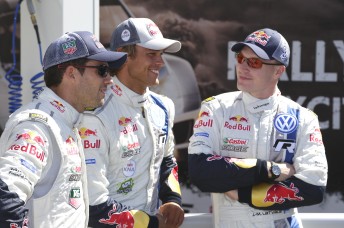 Sebastien Ogier will remain a Volkswagen driver after the German manufacturer confirmed an unchanged World Rally Championship line-up for 2015.

Ogier, who landed VW its maiden WRC title last season and is on his way to successfully defending it this year, had played down the prospects of leaving in recent weeks.

Volkswagen will retain Jari-Matti-Latvala and Andreas Mikkelsen, who are currently both second and third behind Ogier in the title fight.

Continuing with the same crews in the potent Polo R machines was crucial, according to VW motorsport director Jost Capito.

“We currently have the three best rally drivers in the world on our books,” Capito said.

“Continuity is an important factor in any success in motorsport.

“Together with their co-drivers, all three are an essential part of Volkswagen’s overwhelming success in the World Rally Championship, and we are sure that we will enjoy much more success in the coming years with this team.”

Ogier first linked with Volkswagen’s rally team in 2012, having tests in the Polo R WRC while having competition outings in the VW owned Skoda.

Frenchman Ogier and his co-driver Julien Ingrassia have landed 15 of the 24 rallies they have started.

“Renewing the contract with Volkswagen is a completely logical step,” Ogier said.

“The best team with the best car – there was no reason for me and Julien to want anything but what is far and away the best opportunity to battle for wins and World Championship titles.

“I am very pleased that we will continue to work with this team, in which we feel so comfortable and with whom we have enjoyed our greatest successes.”

Ogier goes into Rally Spain this weekend with 217 points, 27 clear of Latvala who closed the gap at the previous round in France.

The Spanish event is the penultimate round ahead of Rally Great Britain from November 13-16.