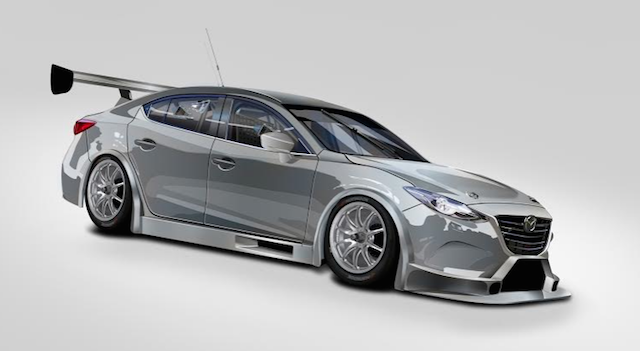 An artist’s impression of the MARC Mazda 3. pic: ss media

At least one of the MARC V8s entered for the 2015 Bathurst 12 Hour will be built as a Mazda 3, team owner Ryan McLeod has confirmed.

McLeod’s Queensland-based crew campaigned three Ford Focus bodied MARC V8s in this year’s event before embarking on a series of endurance races with the cars around the world.

With those three cars set to race at the Dubai 24 Hour in January, MARC is currently building another trio to compete at Bathurst.

The new batch will feature one Mazda and one Ford. Which of the two bodies is given to the final car will then be determined by bodywork production time constraints ahead of the February 6-8 Bathurst weekend.

Jake Camilleri, the son of GPM owner Joe, currently owns and drives one of the three MARC Focuses and is expected to be among the drivers of the Mazda 3 V8 at Bathurst. The first of the second batch of MARC chassis

“Mechanically the car will be the same, it’s just a case of putting the Mazda body onto the platform,” McLeod told Speedcafe.com, confirming that the Mazda will maintain MARC’s 500bhp, 5.0 litre Ford Coyote V8 engine package.

“The first stage of the chassis has already been completed and Pace (Innovations) is currently finalising the computer work for the attachment of the body to the chassis.

“We’ve already done the basic calculations of how it fits to set the roof height and all of those sort of things to make sure there’s equality between the cars in terms of aero.”

McLeod hopes to have all three new cars finished by early January as his team balances work on both sides of the globe.

“We’re sending staff to the UK to complete the repair on the car that was damaged in (the recent 12 Hours of) Hungary and complete preparation for Dubai,” he said.

“There’s parallel staff preparing a lot of the ancillary work and engines here at Norwell (Queensland) while Pace is making the new chassis.

“The three new cars will remain based out of Australia, so we’ll have cars here for people to drive,” he added.

“We’re still looking at various events we can do in Asia, New Zealand and possibly Australia.”

McLeod says air freighting one of the three Dubai cars to Bathurst in order to form a four-car assault on the race isn’t being ruled out.

The team has used a variety of Australian and international drivers throughout its 2014 endurance campaign and is yet to lock in its full roster for next season.

The MARC V8s will compete in Class I at Bathurst against Bruce Henley’s two Mazda RX-8s.

Organisers gave official confirmation this morning that the ex-Grand-Am cars have received entries.

British sportscar maker Radical is also expected to be represented in the class with a pair of its closed-top RXCs.

VIDEO: Check out MARC’s Focus V8s in acton at the Barcelona 24 Hours through this web clip produced by OG Media works