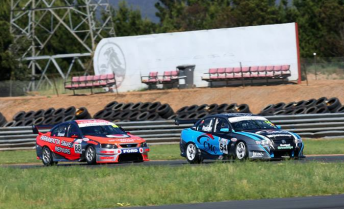 Ruggier beat Simpson in Race 1 to take the points lead

Justin Ruggier has taken the lead of the Kumho V8 Touring Car Series by defeating Ryan Simpson in Race 1 of the penultimate round at Wakefield Park.

The result marks the firs time that Ruggier has beaten the ex-Triple Eight Ford-mounted Simpson in a straight fight all season.

Ruggier, who had won the Wakefield 300 at the Goulburn venue earlier this year, headed Simpson to the line by just under a second.

Beric Lynton took his BMW 1M to a commanding 50 second victory over Garry Holt/Stewart Kostera in the 200km AMC encounter.

Kostera charged through to second in the closing stages after a loose wheel forced an unscheduled pitstop.

Luke Searle/Barry Graham made it two BMWs in the top three, while Jake Camilleri and Jake Williams took out Classes C and D respectively.

Randle out-gunned Hamish Hardeman and series leader James Golding to take the win, with Cameron Hill and Jimmy Vernon, on return to the series after recovering from a broken back, completed the top five.

Ben Grice had taken pole before he was forced to the rear-of-grid for taking two new tyres for the race, where he charged through to an eventual sixth.

Proctor had taken the series lead from I’Anson by scoring pole position earlier in the day before the incident saw the contest swing back in the South Australian’s favour.

A full day of racing action will complete the penultimate round of the Shannons Nationals on Sunday.