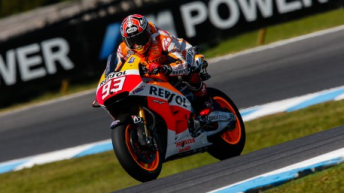 Marc Marquez on his way to 12th pole of the year

The double world champion saved his best until the final minutes of the 15 minute session as the 21-year-old snatched pole with an impressive 1m28.408s effort.

Yamaha’s Jorge Lorenzo had held provisional pole for the majority of qualifying which was held under grey skies at the 4.4km circuit.

However, Lorenzo was unable to hold onto to his advantage with Honda’s Marquez and Ducati’s Cal Crutchlow both going quicker late on.

In the end, Marquez took the pole from 0.234s from Crutchlow, who scored his best qualifying result since joining Ducati.

“I’m happy but it will be a tough race for sure with the Yamaha’s being so quick,” said Marquez.

“The concentration and mental levels are the same but now I feel more relaxed so I look forward to the race now.”

Tech 3’s Bradley Smith impressed on the satellite Yamaha as he slotted into fourth spot ahead of Honda’s Dani Pedrosa, who was forced to come through Q1 having struggled for outright pace all weekend.

Aleix Espargaro will line up in sixth position ahead of Pramac Ducati’s Andrea Iannone and Yamaha’s Valentino Rossi.

Elsewhere, Australia’s Broc Parkes will start his home race from 22nd on the grid for the Paul Bird Motorsport squad.