The motorsport industry lost a respected and long serving member of its tight-knit community when sign guru Terry Slattery lost his battle with cancer this week.

“Slatts” forged his name in the sign business in the 1970s and serviced every Formula 1 race in Adelaide from 1985 and continuing when the race moved to Melbourne from 1996.

At the start of last decade Slattery teamed up with a young Gold Coast sign writer, Mark Weissel, and together they created Sign Event.

The company has become an industry leader in signage in motorsport and in major events across the country.

“I was introduced to Slatts at a ‘blind’ meeting 14 years ago and not long after we had joined forces to create Sign Event,” said Weissel.

“He brought so much knowledge and experience to the business and his reputation was second to none.

“I learnt so much from him and his legacy will not only be the business he helped create, but his faultless reputation and legion of friends.”

As a director of Sign Event, Terry travelled across Australia, working at the showcase V8 Supercars including the Supercheap Auto Bathurst 1000, Castrol EDGE Gold Coast 600 and Townsville 500. 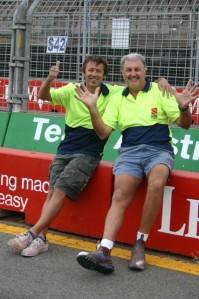 “Terry’s contribution to the development and growth of Sign Event has been invaluable, and will not only be missed by me, but all of the staff at Sign Event, as well as the wider V8 Supercars community,” said Weissel.

“His passion, vision, drive and knowledge he developed over many years within the industry has provided Terry with a reputation that not many achieve in their lifetime.

“Terry loved being on a racetrack, and he would often attend the events, not just to work, but to be part of the atmosphere. His love for motorsport showed through his work.”

“He will be missed at the racetrack, and at all those many dinners, filled with good food, great wine, and even better company.”

Slattery’s career in the sign business began back in 1976 when he and friend Howard Dixon borrowed $5000 to set up Signs Incorporated.

His expertise in understanding how signage best suited a race track and how it appeared on TV led him to be involved in motorsport signage all over Australia.

He was so highly regarded amongst those that represented the sponsors in Formula 1 that he also consulted on track signage internationally.

Terry and Signs Inc were not just motorsport specialists they also had an involvement in many other major sporting events over the 38 years.

The company was also involved in other internationally recognised events such as the Adelaide International Horse Trials, Tasting Australia Food and Wine Festivals, International Flower Expo and many other festivals.

Since the inaugural Tour Down Under cycle race in 1999, Terry has been the official contractor to that event, which has gained considerable traction around the world.

Together with all of these long standing relationships with major events around the country Terry has also supplied quality signage to many of Adelaide’s largest corporate companies Including Coopers Brewery, Bunnings, SANFL, AAMI Stadium and the new Adelaide Oval, The Adelaide Entertainment Centre, Peregrine Corporation plus several Government departments.

Speedcafe.com extends its condolences to Diane, Breanna, Lauren and their families.