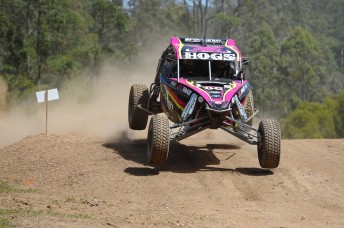 Three drivers remain in the running for the Australian Off Road Championship which is set to be decided at this weekend’s TJM Lockyer 300.

Robinson and Skinner are searching for their first title along with third placed Jack Rhodes and David Pullino (Rhodes Racing).

More than 45 buggy, truck and 4WD crews will do battle over 300km of tough terrain in the Mulgowie area, 100km west of Brisbane.

Robinson won the opening event of the season at Kalgoorlie in April but Rentsch claimed the signature Tatts Finke Desert Race in June and the previous event, the Pedders Suspension Coffs Coast 400 last month.

Rhodes came into contention at Waikerie with a win and remains a mathematical contender despite being eliminated early at the Coffs event.

With a maximum of 350 points to claim at the Lockyer 300, the father and son Rentsch crew lead Robinson by 287 with Rhodes 315 behind.

A battle between Pro Buggy and Trophy Truck has been solid all season with Greg Gartner and Jamie Jennings moving up three places in the standings to fourth after a strong run at Coffs Harbour.

Super 1650 Buggy Chris Browning and Chris Clarke go into the weekend with more than enough points ahead of second-placed Mark Cowie and Brett Blackshaw to be the new Super 1650 Buggy Class Champions.

A tight tussle remains in Extreme 2WD between first placed Robinson and Gartner in second.

Similarly the Prolite Buggy class remains in the balance between current class leader Tony Fehlhaber and Garry Howell and second-placed Matthew Martin, who jumped up the rankings follows his and daughter Kerrie’s second outright finish on the Coffs Coast and first career AORC podium finish.

Paul Youman leads Performance 2WD over Dan Osinksi with Clayton Chapman holding the advantage in Extreme 4WD over Colin Hunter, while Drew Corcoran is the man to beat in Production 4WD.

Scrutineering starts at the Laidley Showgrounds on Friday before the prologue and Section 1 on Saturday at the Mulgowie Road event precinct with the final two sections of racing on Sunday.

For more information on the grand finale, including the event schedule, competitor guide, entry list, and location maps, head to http://www.aorc.com.au/events/lockyer-300/