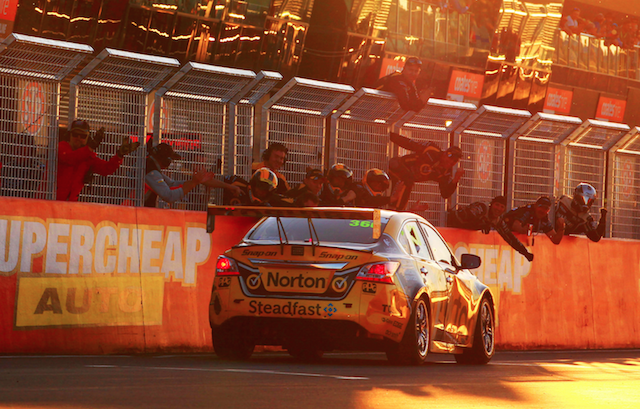 James Moffat says that a second place finish in the Supercheap Auto Bathurst 1000 was just reward for the “phenomenal” effort being put in by Nissan Motorsport to improve its Altima package.

Running ninth when the final Safety Car was called with just 11 laps to go after a fraught race that included two crashes and 12 pitstops, Moffat and co-driver Taz Douglas made the most of a wild finish to score career first Bathurst podiums.

The result also marked the second Bathurst rostrum for the Kelly-owned team since it came into existence in 2009 and the first for Nissan since returning to the sport last year.

The Todd Kelly/Alex Buncombe and Rick Kelly/David Russell entries added to a strong result for the manufacturer in seventh and eighth respectively.

The Altimas were among the fastest across the top of the mountain all week but, despite a range of minor pre-Bathurst engine upgrades, predictably struggled on the long straights. 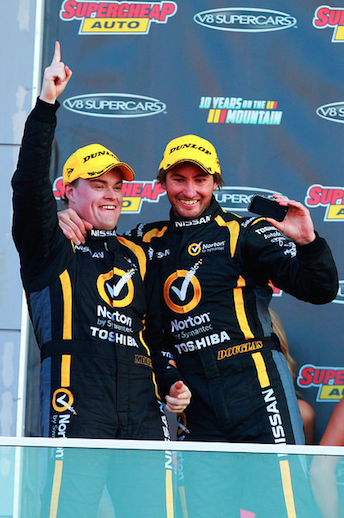 Moffat and Douglas on the podium

Moffat excelled and put his car in Saturday’s Top 10 Shootout, before his chances of a result appeared to be quashed when Douglas twice found the Griffins Bend tyre barrier in the early stages.

The first came as a result of an elbow from the Cam Waters-driven Jeld-Wen Ford, while the second saw Douglas one of many to slip on the deteriorating track surface prior to the red flag stoppage.

“It’s pretty ridiculous to think that we were in the fence at Turn 2 twice,” said Moffat post-race.

“The red flag there sort of saved us because we managed to stay on the lead lap and obviously bunged it all up again (fixed damage).

“The car was really sketchy to drive. In the middle of the race I was quite uncomfortable with the car, I was screaming on the radio, I was giving the engineers a bit of an ear-bashing.

“(But) I can’t thank the team enough with the amount of work that’s gone into this program to get it to this point.

“Even with the amount of work and development that’s happened in the last three weeks since Sandown, it’s just been phenomenal.

“I know every team in pit lane works hard but I haven’t been involved with a harder working bunch of guys.

“You know we’re definitely making ground with the whole thing and to finish second, on the podium is hopefully a reward for all their hard work.”

The Nissan team is working on a cylinder head upgrade that it hopes will finally bridge the straight-line deficit to its opposition, but it is not expected to come online until next season.

“There are probably a couple of people that want me to be very diplomatic here so I’ll say that, yes, it was very challenging for us,” said Moffat of fighting cars with more engine performance.

“Our car was fantastic all weekend across the top of the mountain in the microsectors but there are two sectors on this circuit that we were struggling with a lot with this weekend.

“If that’s not enough evidence there from V8 Supercars that there’s not enough parity at the moment then I don’t know what is.”

Douglas was full of praise for the efforts of close friend Moffat and admitted that he’d simply been caught out by the loose surface at Griffins.

“I was just a tiny bit off (line) and I thought, ‘yeah, I’ll just go around this corner a little bit wide and slow down,’ and I was in the fence,” said Douglas, whose previous best finish in four Bathurst starts was an 18th. 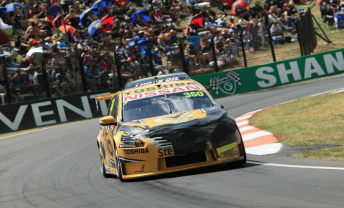 The patch work on the front-end of the #360 Nissan. pic: Peter Bury

“I quickly plucked reverse, which I had good practice at (after the earlier spill with Waters), got it out of there and drove off.

“There was plenty of smoke coming out but I was able to actually feel that the car mechanically was fine, so the boys were able to fix it.

“I thought to myself, ‘I hope I’m not in the car at the end because it’s going to be sketchy out here’.

“It’s awesome to come second with a mate,” he added.

“I think me and James, we’re a good team and we haven’t shown our potential yet. Hopefully there’s even better things to come.”.

The Bathurst result comes as Nissan Motorsport continues to work on its commercial package for 2015, which includes replacing departing sponsor Norton.

Caruso’s race included stopping on the circuit to help former team-mate Lee Holdsworth out of his Mercedes, which was upside down after a specular incident with Russell Ingall.