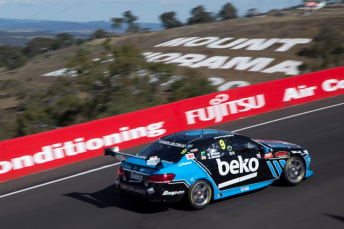 Will Davison was surprised to emerge from the Supercheap Auto Bathurst 1000 with a fourth place finish after a trying weekend for Erebus Motorsport.

The Will Davison/Alex Davison and Lee Holdsworth/Craig Baird Mercedes entries failed to see the top 10 in any of the seven pre-race sessions across Thursday, Friday and Saturday as they struggled to come to grips with the new surface.

Holdsworth’s weekend eventually ended in spectacular circumstances when he was hit by Russell Ingall while running 10th with 30 laps remaining, sending him into the Griffins Bend tyre wall and onto his roof.

Davison’s car had meanwhile developed an engine problem in the morning warm-up that hampered it throughout the day.

The #9 Mercedes’ fastest lap was the slowest of any of the 17 finishes and more than 1.5 seconds adrift of race winner Chaz Mostert’s lap record.

Both Erebus cars ran the team’s standard engine package at Bathurst while it continues to work on its upgraded unit, which made a brief appearance during practice last time out at Sandown.

“I’m not exactly sure what happened but we had some engine issues from the warm-up,” Davison told Speedcafe.com.

“We were really struggling in a straight line and it just got worse and worse as the race went on so we just persevered.

“It was very easy in a race like this when you are frustrated at your performance early on to panic and make a mistake.

“There were going to be heaps of mistakes so we just thought let’s just bring this home.

“It wasn’t through lack of trying I was on the ragged edge every lap to be one second off the pace, effectively.

“We had a misfire and we were losing tons of time I was just trying to make it up over the top of the mountain.

“Its a credit to the guys who have worked so hard and it was good to get a result after Lee’s accident.”

Despite the problem, the Davisons remained on the lead lap throughout the day and, after electing to conserve rather than undertake a late splash for fuel, took the final restart in fifth.

That became fourth when Craig Lowndes took a penalty before a wild final lap saw Davison pass an out-of-fuel Jamie Whincup but, in turn, be passed by Nick Percat for the final podium spot.

“It wasn’t your standard race, it was ridiculous,” added Davison.

“We were just smart and trying to get ahead of the game with strategy because we had nothing to lose.

“At the end we took a bit of a punt because our economy is nowhere near the guys at the front so we were saving massively at the end with an engine issue.

“To be told you are on third but wounded, I was just praying to hang on to it.

“Mid-race I thought if we could scrape a top 10 that would be a great result so the way we were going if we could just hang in there we would come through.

“None of us expected a fourth place finish.”

The result sees Davison move from 15th to 10th in the championship standings ahead of the Castrol Edge Gold Coast 600.