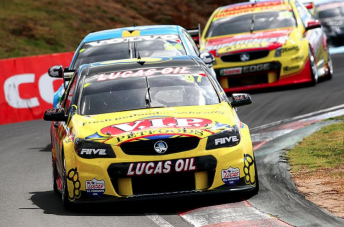 Shane van Gisbergen was left to seek solitude in Tekno Autosport’s transporter after a minor error cruelled a strong challenge for victory in the dying stages of the Supercheap Auto Bathurst 1000.

After becoming the first single-car team in 15 years to score a Great Race pole, the Kiwi and co-driver Jonathon Webb proved among the most competitive combinations for the majority of race day.

Van Gisbergen surged to the front shortly after a Safety Car restart with less than 40 laps to go, carving through eventual winner Chaz Mostert, Fabian Coulthard and Craig Lowndes in quick succession.

After leading through the next round of Safety Car-induced pitstops, attempts to save fuel in order to make it to the end proved futile.

The team’s engineer Dr Geoff Slater subsequently joined the majority of the field in telling his driver to push and make a late splash-and-dash stop.

The final stop, triggered by a Safety Car with 11 laps to go, was set to feed Van Gisbergen back into third place behind the non-stopping and still fuel-conscious Jamie Whincup and Mark Winterbottom, but instead proved a disaster.

“We think I over-fuelled it (using too much throttle with the pitlane speed limiter on, which floods the engine) taking off and it just stalled,” Van Gisbergen told Speedcafe.com post-race.

“It had been hard to get out of the box all day and I just used too much throttle.

“Normally it would just start up and drive away but that starter motor was dead.”

Exiting the car, a devastated Van Gisbergen brushed aside television crews as he marched through the Tekno garage for the sanctuary of the team truck.

After replacing the starter motor, the team returned to the track and salvaged 16th, but it was naturally of little consolation.

“We had a fast car and whether we would have won or not, I don’t know, but we had an awesome shot at it.

“It was the first time I had a clean, fast car at the end of the race and I was giving it all I had.

“I made some good passes to get to the front but that’s what happens here. It’s a tough place to win.

“(After it happened) I just wanted to be by myself and get away from everyone,” he added.

“Because it was an error on my part I just felt so bad for everyone here.

“It’s hard to explain. I’ve never had a good chance to win here before and we had one today but chucked it away.”

Van Gisbergen had started the weekend highly frustrated with his car, tagging the walls in both Thursday practice and Friday qualifying as he dragged seemingly impossible lap times from the unruly Holden.

“We came here with a diabolic pig but we dialled it in and the track came to us a bit as well,” Slater told Speedcafe.com.

“We dialled it in and it was good in the Shootout, but then in the race it wasn’t great initially.

“Shane was struggling to keep up with Frosty (Mark Winterbottom) and Scotty (Scott McLaughlin) but we made some changes under the red flag and the car came on well.”

The red flag had provided an unexpected opportunity to tweak the car’s aerodynamics mid-race.

“Our car was very slow on the straights but we took wing off at the red flag which helped and changed the front-aero as well,” said Van Gisbergen.

“It was more hairy across the top but at least we could keep up down the straights.”

As for struggling with the car in the early part of the weekend, the 25-year-old says he dealt with it in the only way he knows how.

“You’ve got to push here and hang it out,” he said.

“Unfortunately I made a few mistakes and broke a few rear-ends, but you’ve got to push.

“The whole weekend has been unbelievable really.

“It was such a high getting pole and then today… it’s pretty emotional this place.”