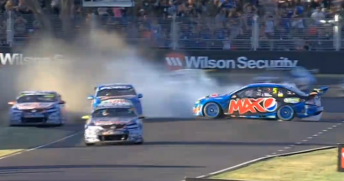 Craig Lowndes says that glare from the setting sun was largely to blame for late-race contact that ended both he and Mark Winterbottom’s hopes of victory in the Supercheap Auto Bathurst 1000.

Lowndes spun Winterbottom at the exit of Hell Corner while fighting for second with less than eight of the 161 laps remaining.

The contact saw Winterbottom complete a full 360 degree spin and lose seven places, while officials took little over a lap before issuing Lowndes a drive-through penalty.

Lowndes later said that the sun, a factor due to the marathon eight-hour race duration, contributed to the incident.

“The sun glare was quite bad and I just didn’t see him in the end,” Lowndes told Speedcafe.com.

“I have gone and seen him and he is alright but we are both disappointed with what happened.”

Lowndes and co-driver Richards had a quiet race for the most part, avoiding the widespread carnage to move into a prime position ahead of the closing stages.

The five-time winner joined Shane van Gisbergen and Chaz Mostert in electing to push before making a splash-and-dash pitstop under yellow with 11 laps remaining, after which Lowndes rejoined third behind Winterbottom and team-mate Jamie Whincup.

“The car was good at the end and I think we tuned the car right but with all the Safety Cars going on it was hard to get a rhythm,” Lowndes explained.

“I think the car was good enough to be on the podium but then we had that penalty with Frosty, which was deserved.”

A 10th place finish marked the first time Lowndes missed the Bathurst podium since 2009 and his worst finish since 2005.

A deflated Winterbottom stressed post-race that he was pleased to see team-mates Chaz Mostert and Paul Morris win.

Winterbottom and co-driver Steve Owen had put themselves in position to win the race despite losing track position to several rivals when forced to stack behind Mostert in the pits during the penultimate Safety Car with 28 laps remaining.

Engineer Grant McPherson subsequently elected to pit the car again while still under yellow two laps later and commit to completing the race without a late pitstop.

The intervention of the final Safety Car meant McPherson could tell Winterbottom to go “on maximum attack” after the restart and, while he proved unable to hold out Whincup, the Red Bull Holden eventually ran out of fuel.

“We did everything right and got no reward,” said Winterbottom.

“It was a crazy day and I can’t believe how it all worked it.

“The priority was to bring the trophy back to our headquarters and we’ve done that. For a 22-year-old (Mostert) to win Bathurst and in such a fashion is amazing. I am really proud of him.”

“Mark didn’t have to stop for fuel again and in my eyes that was an easy one-two,” Edwards told Speedcafe.com.

“If it wasn’t for Craig’s mistake we had a one-two in the bag.

“I’m not sure which way around it would have finished to be honest because Frosty had great car speed and wasn’t concerned about fuel.

“It didn’t happen and I’m disappointed for Frosty because he could have been a back-to-back Bathurst winner.”