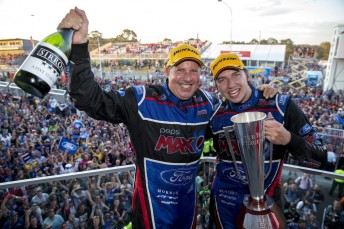 Veteran Paul Morris has finally been able to cure his Mount Panorama nightmares by conquering a schizophrenic Supercheap Auto Bathurst 1000 littered with drama.

Morris, 46, won the Great Race alongside Ford Performance Racing star Chaz Mostert, who is less than half his age.

Mostert produced a brilliant drive to come from last to first in a stunning fightback after Morris had buried their #6 Falcon in the Griffin’s Bend tyre barrier less than 50 laps into the 161-lap classic.

The victory will help quell still bitter memories of Morris’ victory in the 1997 Super Touring Bathurst 1000, which was stripped of the BMW team post-race after a driving stint length breach for co-driver Craig Baird.

“Honestly I’ve been having nightmares ever since 1997 about this thing,” Morris, the self-styled ‘Dirty Dangerous Dude’ of V8 Supercars, told Speedcafe.com

“To win it and then have it taken away. A lot had gone into it.

“I’ve been coming here to race since 1991 and it honestly hasn’t sunk in yet. 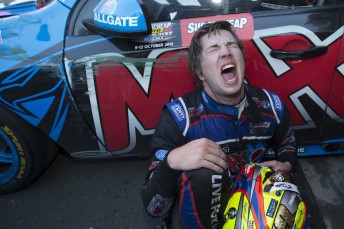 The year Morris had the Great Race taken from his grasp, Bathurst partner-in-crime, Mostert, was just five years of age.

The parallels of the Bathurst winners are an extraordinary story.

Morris reckons he should have walked away from the top class 10 years ago yet he still dabbles in the Dunlop Series and has a particular passion for Sprint Cars.

“I probably should have retired ten years ago, but I kept trying to come back because I wanted to win the thing,” Morris said.

“But thanks to Chaz now I’ve ticked the box.

“I’ll keep going then just for wankers like you, mate (referring to a comment made at the post-race press conference).

“A lot of people thought it was a pretty weird decision when Tim (Edwards) and Rod (Nash) gave me a gig but it turned out that they knew what they were doing, didn’t they?”

“There were a few points in the weekend where Chaz was stressing a bit with things that were going on,” Edwards told Speedcafe.com.

“It was great to watch Paul coaching Chaz. He did take on a mentoring role with Chaz through the weekend.

“Yes, he had a moment when he went into the tyres at Turn 2, but the reality is no one was talking about that corner breaking up until Paul raised it (when he was in the fence).

Morris joined FPR at the start of the season, helping the team with race strategy as well as helping the squad recruit commercial partners.