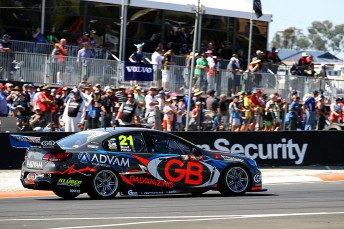 Dale Wood calls for spotter after being caught out

Dale Wood has attributed his sizeable McPhillamy Park shunt with team-mate Andrew Jones to the lack of a mountain spotter.

The heavy shunt was triggered when Luke Youlden struck a kangaroo in Fabian Coulthard’s #14 Brad Jones Racing Commodore, bringing out the Safety Car on lap 44.

Wood had not long glanced the wall at Griffin’s Bend in the #21 BJR Commodore before arriving at full tilt into the back of Jones in the run to McPhillamy Park.

A dejected Wood explained that he arrived at the blind corner with little warning of what was ahead of him.

“It was just a tough situation, you know, maybe a bit of a communication thing,” Wood explained.

“We came over the top, still obviously at a pace trying to form back up in the train, and then you come over that crest there and everyone’s trying to pull up.

“You’ve got a car park, you’ve got people darting all over the road, and I couldn’t stop it.

“Unfortunately as it is I ran into the back of my team-mate, which is the last thing you want.”

When asked what could have been done to prevent the situation, the 2013 Development Series champion revealed that the team had not employed a spotter at the top of the mountain, a practice which is commonplace as a means of proactively identifying Safety Car interruptions and potential hazards.

“I think we need a spotter up on top, that’s about it.”

Car #21 became the first retirement of the race proper after the Holden Racing Team’s car #2 was withdrawn yesterday.

Jones was able to return to pit lane for primary driver Jason Bright to resume racing, albeit several laps down.