Officials call a stop to Bathurst 1000

Officials call a stop to Bathurst 1000 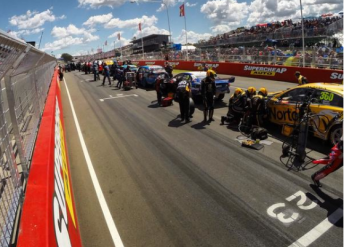 Officials have sensationally red flagged the Supercheap Auto Bathurst 1000 after the track surface began to disintegrate at Griffin’s Bend.

With only 61 laps in the books the race has been halted with David Russell leading in the #15 Nissan he is sharing with Rick Kelly.

After a series of incidents which has seen several drivers sliding off into the fence at the right-hander at the end of Mountain Straight, race control has stopped proceedings in order to examine the surface.

Drivers who have come unstuck at the corner include Paul Morris (FPR), Taz Douglas (Nissan) who went in twice, Scott Pye and Dale Wood as well as several near misses for drivers.

The stoppage comes less than the minimum permitted distance 75 percent (121 laps) required to constitute a race.

Officials were also closely looking at parts of the track at The Dipper as well as Griffin’s.

Teams have been directed to stop on the grid awaiting directions for a restart.

“It is strange. There seems to be two places on the track we are looking at,” said Craig Lowndes.

“There haven’t been any complaints about The Dipper but obviously Turn 2 is a real danger.

“When you do hit it (the patch at Griffin’s Bend ) you can see whats unfortunately happened to the cars.

“I hope this is going to be ok for the rest of the race but safety first we got to get it fixed and then get on with it.”