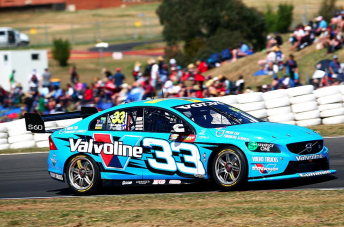 The Volvo of Scott McLaughlin and Alex Premat leads a heavily interrupted Supercheap Auto Bathurst 1000 at the halfway stage.

McLaughlin and his co-driver Premat had led the majority of the race before it was brought to a halt for more than an hour due to the track surface breaking up at Griffin’s Bend.

The Volvo squad are heading into unknown territory having completed only 500km in a race simulation prior to this event.

The Volvo made an impressive getaway from third on the grid to lead into the first corner with Ford Performance Racing’s Mark Winterbottom in second and Shane van Gisbergen in third.

Steven Richards was fourth behind the wheel of the #888 Red Bull.

But the man on the move in the early stages was Jamie Whincup as he stormed through the pack having started in 23rd on the grid. By lap 13 the reigning V8 Supercar champion had found himself in fifth spot after a succession of slick overtaking moves.

The big loser was Bright, who struggled with handling issues in the Brad Jones Racing Commodore, as he slid down the order from fourth to 12th position.

The Volvo quickly began to open up a healthy lead before pitting to hand the car over to Frenchman Premat. The lead group all dived into the pits on lap 21 except for Whincup who came in a lap later.

Premat continued to lead once the first round of stops were completed with the Nissan of Michael Caruso leaping up into second ahead of the #5 FPR Ford piloted by Steve Owen.

Drama struck for the Brad Jones Racing entrant of Fabian Coulthard and Luke Youlden as the latter triggered the first of five Safety Cars when he locked up at The Chase and slid into the gravel. He rejoined the race with a severely flat spotted tyre after being towed from the gravel.

Racing resumed on lap 28 with Premat leading but its wasn’t too long before the introduction of the Safety Car for a second time. This time a kangaroo leapt onto the circuit at Mountain Straight which was collected by Youlden.

Seconds later Paul Morris slid into the barriers at Griffin’s under the Safety Car caused by the track surface beginning to break up.

But worse was to follow when Dale Wood slammed into the back of his team-mate Andrew Jones in the #8 having been unsighted to the slowing pack behind the Safety Car. Wood’s car came to a halt at the side of the road with heavy damage.

The race continued on lap 50 only for it to be halted again five laps later due with the #16 Dick Johnson Racing Falcon of Scott Pye in the wall at Griffin’s Bend, which occurred just moments after Taz Douglas slid into the barriers at the same corner. The Nissan managed to rejoin the race before Pye made heavy contact with the wall.

Premat had held the lead by 3.3s before the Safety Car was deployed.

On lap 60 officials made the decision to red flag the race due to the deteriorating condition of the track surface at Griffin’s Bend and The Dipper, forcing the cars to come to halt on the grid.

Marshals endeavoured to patch up the track during a stoppage of more than hour before racing eventually continued with the out of sequence Nissan of David Russell leading the field. He soon slipped down the order after running wide at the infamous Griffins’.

Steven Johnson inherited the lead but he then clouted the wall at Reid Park which introduced the Safety Car. Just before the incident Jamie Whincup and the Todd Kelly had a coming together at the exit of The Chase which bent the steering of the #1 Red Bull Holden.

Whincup rejoined the race a lap down, but was given a black flag for an unsafe re-entry to the race.

However, the race was neutralised on Lap 71 when Pye suffered a huge accident caused by a suspension issue on the exit of The Chase. 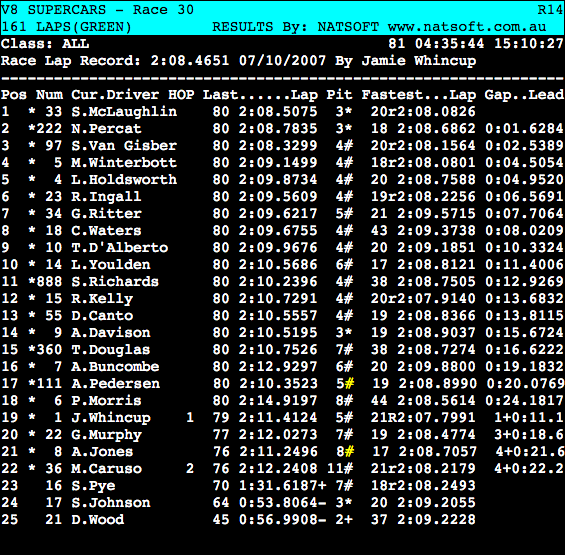