Major crash for Luff and Lowndes in Practice 6

Major crash for Luff and Lowndes in Practice 6 Lowndes and Luff slam into the tyre barrier

A high-speed crash between Warren Luff and Craig Lowndes in Practice 6 have the Holden Racing Team and Red Bull scrambling to fix major damage at the Supercheap Auto Bathurst 1000.

The accident occurred 20 minutes into final practice when Luff, co-driving with Garth Tander, arrived at Griffin’s Bend with no brakes.

The spinning HRT entry punted the rear of Lowndes’ car before making right-rear contact with the tyre wall and ending up on its side. 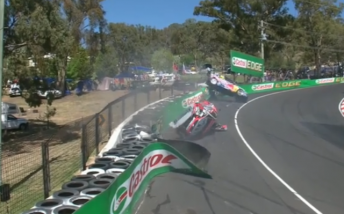 The contact with Luff also sent Lowndes spinning rear-on into the tyre barrier, which spectacularly shot the back of the Red Bull car into the air before coming to rest.

Both drivers emerged unhurt, with Lowndes helping to extract his former co-driver Luff from the wreck.

Luff had exited the pits on the lap of the crash and, while the team had made a suspension tweak, the driver confirmed that it had not completed a brake pad change.

“I came up Mountain Straight and the pedal has gone all the way to the floor. We’re not sure what happened,” he said.

“We hadn’t done a pad change at all. We need to find out what’s gone wrong.”

The incident is the second major crash for the Tander/Luff Commodore this weekend after the primary driver crashed at The Dipper on Thursday.

A horror opening day had also seen Luff come to grief at the top of the Mountain in his Carrera Cup Porsche. 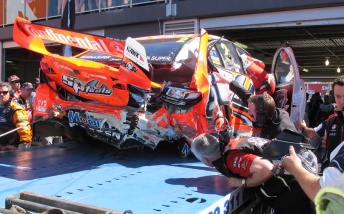 In the immediate aftermath of the Practice 6 crash, Lowndes expressed doubt that either car would make the Shootout later today.

“Unfortunately we got caught up in someone else’s incident,” he said.

“I feel for Luffy because he’s had a rough trot.

“It might be a Top 8 Shootout. Their car is probably worse than ours, so we’ll see.

“The guys will work hard to get it right.”

The two late efforts bumped Shane van Gisbergen from the top of the order.

The Tekno Holden driver had run a best of 2:06.48s when completing his own Shootout simulation with 10 minutes remaining.

The Bottle-O Falcon returned to the track following its Friday qualifying crash, but completed just six laps due to a fuel pump issue.

There were dramas too for Todd Kelly, who tagged the wall at Reid Park just prior to the Luff/Lowndes crash, breaking the left-front suspension of his Nissan.

VIDEO: Footage of the Luff/Lowndes crash